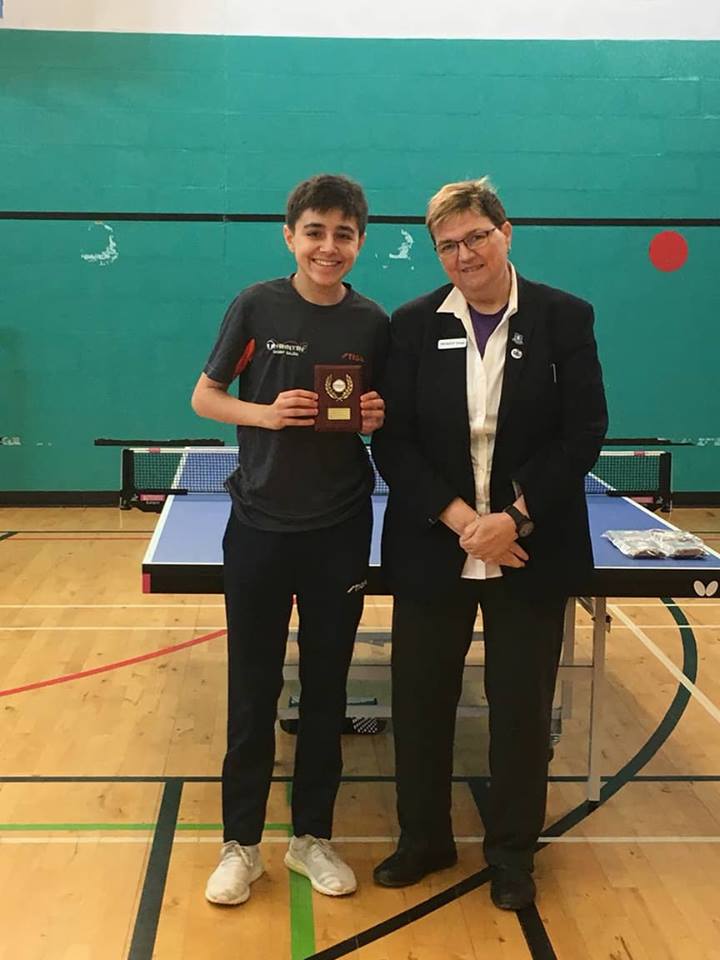 It was an all Dumfries final with the two top seeds reaching the final. Having dropped the first set Danny came back strong to win the title 3-1 to win the junior boys title.

In the junior girls’ event, Faye Leggett won group 1 with wins against Paula Callaghan and Naomi Provan, Pauls was the runner up.

Group 2 was won by Wiktoria Smolarek, who had lost to Catrin Ace but defeated Amelia Norbury and Holly McNamara to win the count back. Amelia Norbury was the runner up.

In the final it was a rematch from group 1 as Faye Leggett took on Paula Callaghan. Faye was a worthy winner of the junior girls’ title winning (3-1).

Danny Bajwa added a second title by teaming up with Keir Morton to win the junior doubles event, they defeated Harvey McDonald and Tony Nelson in the final3-1 to win the title. In the semi-final Danny/Keir defeated Charlie McGowan/Haydyn Jackson. Harvey and Tony accounted for David Hay/Jacob Munro in their semi-final.

In the plays offs it was an all North Ayrshire account as Chad Duncan faced Patric Hollywood. In a very Close match it was Patric who emerged as the winner (3-2). In the other play off match Rayyan Khalid accounted for Haydyn Jackson (3-10).

In the semi-finals, Charlie Morton continued his fine form as he defeated Luke Hennessey (3-0) and Rafal Wilowski defeated Michael Zhang (3-0)

Charlie Morton was a worthy winner of the cadet boys title defeating Rafal Wilowski (3-0) in the final.

Group 1 was won by Faye Leggett, who defeated Amelia Norbury, Holly McNamara and Katie Fulton. Group 2 was won by Wiktoria Smolarek who got her revenge from her earlier loss against Catrin Ace, also defeated Naomi Provan and Jessica Hogg.

In the final Faye Leggett secured her second title of the day defeating Wiktoria Smolarek (3-0).

Group 1 was won by Charlie McGowan, who defeated Keiran Walker and Mackenzie Rough. Group 2 was won by Kailun Yuan, who is currently ranked number 3 at under 10 level in China, Kailun defeated Haydn Jackson and Finlay Hunter. Group 3 was won Nathan Hogg who defeated Kris Taylor, Daniel McFaul and Aron McDonald.

In the semi-finals, Charlie McGowan was a thriller against Haydn Jackson (3-2) to reach the final and Kailun Yuan also secured a (3-2) win against Nathan Hogg.

In the final, both Charlie and Kailun put on an excellent display of table tennis, well beyond their years to enthral the crowd, but it was the visiting Kailun who was the victor securing his first West Open title defeating Charlie (3-1) in an excellent final.

Amelia Smolarek was the winner of the minor girls’ event, defeating Jessica Hogg and Katie Fulton to secure the title, Jessica Hogg was the runner up.

Kailun Yuan was the winner of the under 11 event defeating Daniel McFaul, Amelia Smolarek, Ross Marshall and Ruairaidh MacLean. Daniel McFaul was the runner up.

The West of Scotland Table Tennis League would like to thank Alison Woods, Ken Cadogan, Corinna Whitaker and Senga Thomson for all their help in the running of the event, their help was very much appreciated.

Our thanks to the Sports Council for Glasgow for their support of the event.