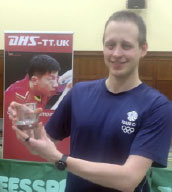 Due to Covid this year’s Scottish Ping Pong Championships were rather different to previous years. More than half the usual entries and the after-event social were missing; not really compensated for by the extra face masks, hand sanitisers and table cleaning.

On the upside the event was sponsored for the first time by DHS-TT.UK who overlooked the small turnout, offering prizes to the value of well over £1000, and ensuring that no participant went home empty handed.

The group stage saw Number 1 seed Ian Johnston pushed close by Aberdeen’s Charlie Matthew, Charlie can consider himself unlucky to lose the first 15-14 with Ian securing first place in the group by taking the second 15-10. The other Group 1 players had a close 3 set match with Andrew Nimmo having match point in the second before Edinburgh player Charlie McGowan staged a comeback to secure a place in the play off.

John Hannah the second seed, won his highly competitive group. The closest match in the Group saw Iain Martin lose the first to an in-form Jacob Monro, before hitting back to win in 3. This gave Iain second place in the Group. Jacob secured 3rd. Highly ranked Aberdeen’s Gregor Ksiazek was stunned by the high quality of the play and joined Alan McIntyre in the Consolation event.

Having travelled through from Glasgow the third seed Gary McIntyre was involved in a fantastic group. 3 of the players won 2 ties each. In the 3-way count back Dundee’s Paul Monteith came out on top with Gary second and Ayrshire’s Nathan Hogg taking 3rd place to secure a place in the play off. Despite some excellent Ping Pong from Catherine Inverarity, the high standard of the group left her in the consolation event.

In the top half of the knockout Jacob must have felt unlucky to draw the No 1 seed in the first round, this is the 4th year in a row that Jacob has been in this position. Jacob fought well but Ian was just too strong for him. Gary McIntyre played an excellent match against Iain Martin. The semi-final meeting between former flat mates Ian Johnston and Gary was a close affair. Gary staged a comeback late in the first set to take it 15-14, Ian took the 2nd in a comfortable 15-3 scoreline. The third set score of 15-7 doesn’t do justice to Gary who was 5–1 up. Ian also took the 4th set to secure a place in the final.

Bottom half of the draw saw Charlie Matthew in imperious form against Paul Monteith who despite some fantastic play lost 15-12, 15-6. Nathan Hogg’s reward for winning the play-off was a match against John Hannah. In the Semi Final John showed why he is ranked so highly, taking the match against the in-form Charlie in straight sets.

The final didn’t disappoint and the scoreline just doesn’t reflect how close it was. Ian won the first before John found form early in the second to take a 8-3 lead. Ian then found some blistering form taking ten points in a row including 2 unbelievable recovery shots after the net sent the ball sideways. John was so surprised by the first he just wasn’t ready when it popped up, the second hit the net giving John no chance. With Ian 13-8 up the set looked over but John went on a run of his own with some fantastic play closing to within 1 point before Ian managed to get across the line 15-12. Ian took the third set to become Scottish Champion, win the Ronnie Turnbull Quaich and a £400 voucher for table tennis equipment from tournament sponsor DHS-TT.UK. 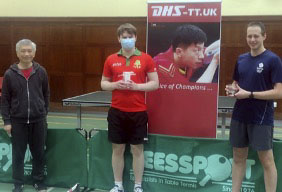 Richard Lo presents the prizes to John and Ian 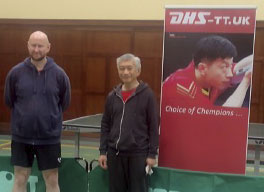 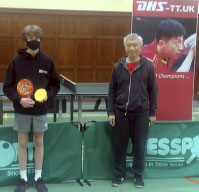