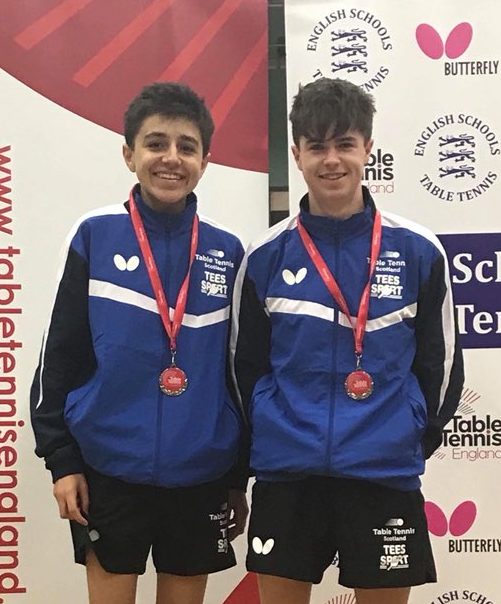 Congratulations to all players, coaches and officials who took part at the weekend in a packed programme of matches at the Senior Schools International Championships in Worcester.

There were excellent performances by Scottish players in all categories but the headlines belong to the Intermediate Boys Team of Dylan Curry and Danny Bajwa who came oh so close to winning the Gold medal against England in the final match. Great performance by both boys in the team event to win a Silver medal with Danny Bajwa a whisker away from winning all three of his matches in the final, just being edged out 14-16 in the fifth end of the deciding match against Amirul Hussain.

Sunday proved to be a Gold medal day for Dylan Curry from Banchory who powered his way to the final taking revenge on England`s Naphat Boonyaprapra and dominating the gold Medal match against England`s Joe Cope who had defeated Danny in the semi final.

All in all, an exhausting but successful weekend of travel, competition and enjoyment for everyone involved.

Terry Mclernon MBE, Scottish Team Manager, said “ I could not be more proud of all the Scottish players, who played their hearts out, behaved impeccably and were great ambassadors for their country. My thanks also to the coaches, officials and parents for their invaluable support.

Finally, congratulations to the organisers and in particular we wish John Arnold (former President of the English Schools Association) and his wife Margaret a very happy retirement following 50 years of outstanding contribution to schools table tennis.”

Full results from the weekend can be found on the Table Tennis England website https://tabletennisengland.co.uk/news/archived/unbeaten-bennett-leads-england-medal-roll-call