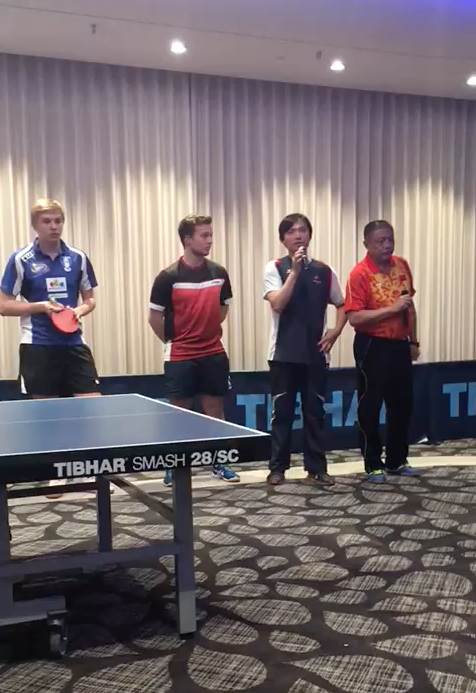 TTS kindly sent Paul R-Jackson, Director of Coaching to the above conference held by ETTA. This was in Warsaw on 9th/10th October.

The first day was held by the Chinese coach Li Xiaodong who presented in Luxembourg 2 years previously. This time the topic was more practical about technique, even though the history of table tennis over the years was similar.

The translator was excellent and very precise. There was a practical demonstration also with two excellent polish national players ( part of this is filmed on the TTS WEBSITE)
The main points that I noted which are useful to Scottish coaches were:

1) The new ball is hit with a punch then flick technique.

2) The Chinese practice two main techniques, hitting the ball in the same part of the racket and early in the bounce.( This was highlighted with the Polish players being talented but inconsistent in these two aspects).

3) Variations in changing rhythm by hitting the ball at different heights with the right combination of punch/flick and bat angle are a key feature of Chinese practices.

5) Using finger and thumb for fast switch from forehand to backhand in front of body.

6) Short steps leading with left leg and also tucking it behind front leg to allow for 2nd short or longer step to play ball.

7) Service is a BOUNCE punch at ball and they practice this into every area of the opponents court. (different spins/speeds and throwing heights), usually for over an hour each day.

The second day was held by Japanese coach Watanese Riki, who also had a good interpreter. His theme was about how the system in Japan is bringing through some world class players and they are now matching the number in the top 20 by China (6) but not as highly ranked at present.

These are the main points I think Scottish coaches could take from the Japanese methods:

2) Have positive attitude to losing and learn from each match, blame themselves and focus on every ball.

3) Success in a long journey and they start at 5 years old (Miu Hirano went from no 841 to 6 in the world for ladies. This took 7 years!

The final session was about plastic balls but this was not very interesting and finished early.
Only points were players were closer to table and flick returns easier due to lack of spin.
The overheads for both these lectures, if coaches want more information are on the ETTA WEBSITE, under coaching.