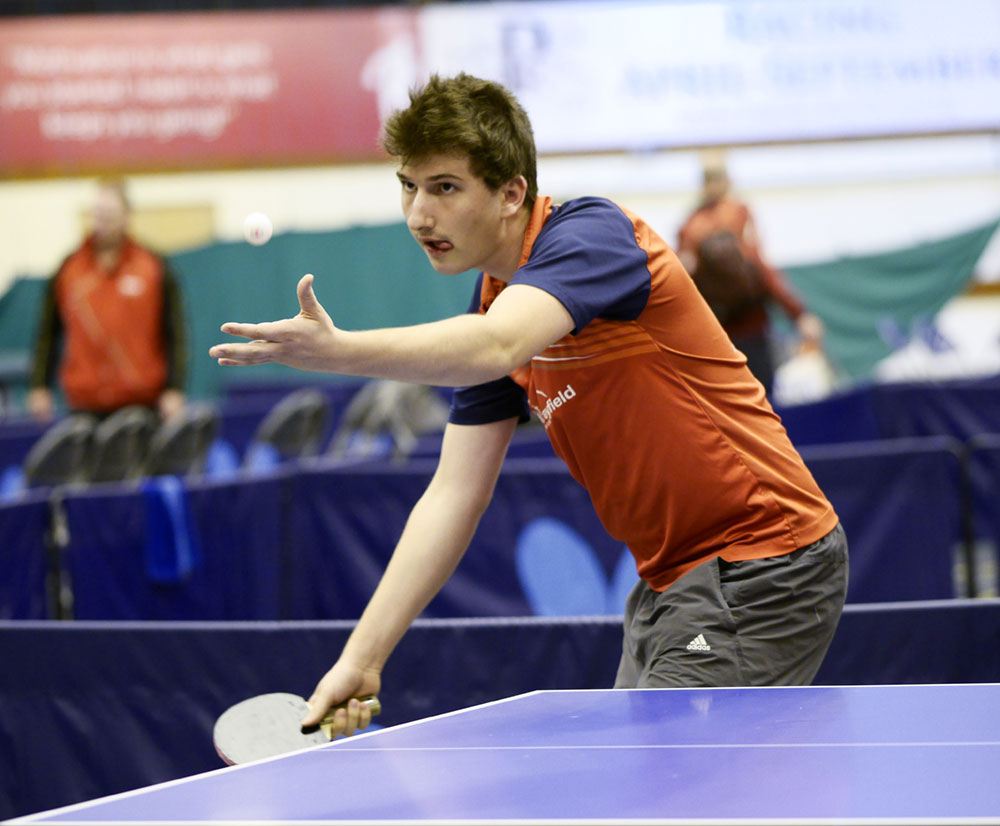 The newly expanded Scottish National League got underway on Saturday at Bell’s Sports Centre, Perth. 46 teams took part in 6 divisions, producing a lively atmosphere in the hall. With all teams playing three matches there was a lot to play for.

The top of Division 1 already has a familiar look with reigning champions North Ayrshire A on top having registered three 6-0 victories. Their team of Colin Dalgleish, Zak Wilson and Chris Main were clinical as they completed the day without having lost even one set ! (indeed only taken to deuce a couple of times). Main was unsurprising happy with his team’s performance feeling that it owed much to the extra training they been doing in order to take on the twin challenges of the Scottish National League and the British Premier League. He hopes that the same 3 players will be available for the other two sets of SNL fixtures, though Ethan Chapman will provide cover if needed. Main enjoyed the atmosphere on the day and the ‘busy, busy hall’. He was also happy to see the strong start made by North Ayrshire B as they attempt to regain a position in the top division. Main believes that Murrayfield A clearly represent the biggest challenge in Division 1, though other teams (such as South Ayrshire and Dumfries) also pose a threat.

Murrayfield A also began their campaign with 3 victories, though they were less convincing. John Hannah felt the team had performed pretty well ‘despite some lapses in concentration and lackadaisical moments’. He cited his own 12-10 in the fifth set victories against Gordon Muir of Murrayfield B as illustrating this slight lack of focus. Hannah praised Alicja Czarnomska who recovered the tough loss (to a sharp looking Ryan Docherty) in her opening match to win in her other five matches (including recovering from 0-2 down versus Dundee A’s Jason Fleming). Hannah admitted that finishing above North Ayrshire is going to be ‘very tough’ and that getting strong sides out for every match was crucial in order to ensure as many 6-0 wins as possible.

In the morning fixtures the South Ayrshire A vs Drumchapel match saw lots of fast rallies between some of Scotland’s best young talent (Harvey McDonald’s 12-10 in the 5th victory against Alisa Khalid perhaps the pick of the matches). Tony Nelson produced a good win in defeating the experienced Andy Dunlop in straight sets. South Ayrshire A’s 6-0 winning margin was a bit harsh on Drumchapel A. A new look Dumfries A team started a bit shakily against Murrayfield B, with Keir Morton forced to produce some big forehands in order to win at deuce in the 5th before Callum Morgan, seemingly in control at 2-0 up, lost to Gordon Muir. Dumfries eventually won the match 5-1 with new recruit Krzysztof Opila picking up two key wins.

In the lunchtime matches, Ryan Docherty and Chris Main produced some highly entertaining lob vs attack rallies but again North Ayrshire cruised to victory. In the match between Drumchapel A and Murrayfield A, Johannes Laute was well tested by Alisa and Zaid Khalid, while Lucy Elliott pushed Alicja Czarnomska close in a tight four setter. Despite a good win for Glyn Eggar vs Callum Morgan, North Merchiston were defeated 5-1 by Dumfries. In the closest match, Murrayfield B will feel a good chance of a draw went begging as Tony Nelson and Harvey McDonald secured good wins versus Yuhuan Wang to help South Ayrshire A achieve a 4-2 win.

In the day’s final set of matches a battling display by experienced campaigner Geoff Hunter helped his side to a handy 5-1 win against Dundee A. This represented a good comeback by the Edinburgh side following a baptism of fire in their opening match back in the top division (a hammering by North Ayrshire A). In the only drawn match of the day, South Ayrshire’s Harvey McDonald found form to beat Keir Morton and then overcame Krzysztof Opila (11-7 in the 5th) to secure a point for his side to keep them alongside Dumfries on 5 points.

In Division 2 Scottish Vets A and North Ayrshire B lead the way-both winning their 3 matches. Tam Lawlor and Brian Wright both picking up 5 wins for the Vets while Jamie Johnson led the way for North Ayrshire wining all 6 of his matches. Murrayfield C are third after an impressive 6 from 6 performance from Borui Chen on his debut for the club.

Glasgow South A (keen to return to Division 2), Stirling and Scottish Vets B all produced 3 wins to sit at the top of Division 3. In Division 4 it is the two promoted sides – Edinburgh University A and Bellway West Lothian – who occupy the top 2 spots. Mae Ng led the way for the students, winning 5 of her 6 matches in convincing fashion and coming back from 0-2 down to beat Murrayfield E’s Jamie Sloan. Dundee C were the only side to achieve three wins in Division 5 (Paul Monteith and Andrew Nimmo both achieving 6 from 6). The new 6th Division is headed by newcomers Highland TTC (2 wins and a draw versus another new team Heriot Watt University) and Haddington A (for whom the passionate Rolandas Skultinas produced some handy wins).

Thanks to all who assisted, including Richard Yule for his efforts in getting the hall ready and Graham Muir for inputting most of the results.

Full tables and results available here: https://www.tabletennis365.com/ScottishNationalLeague/Tables/2019-20/All_Divisions
The next set of fixtures take place on Sunday 8th December 2019. Divisions 1-4 will play at Bathgate Academy, while Division 5 will play at Ward Road, Dundee.