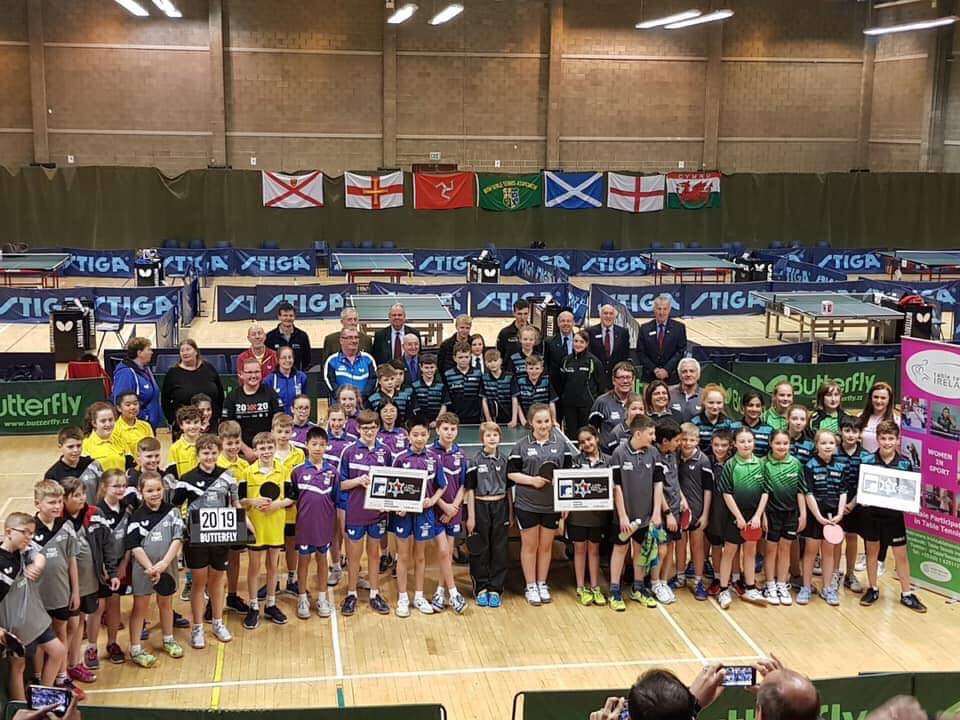 An early rise was had by all for the first of 4 team matches at 9am against Ireland B for both girls and boys. A real team effort was put together by the Scottish girls with a 6-4 win over a strong ‘mixed nation’ Ireland B team. The boys kept up their solid performance with a 9-1 win.

Next up was the favourites, England. The English girls proved too strong for our girls’ team, the result was 1-9 with Ilaria & Grace picking up a win in the doubles for the team. The boys were up against a very strong English team. The result was also 1-9 with Daniel & Haydn winning the doubles against the English number 1 & 2.

After lunch the matches resumed with matches against Ireland A. The girls had a tight match with lots of close games (4 and 5 sets) with the end result being 0-10. The overall result does not reflect the matches that were played. The Irish boys were too strong for the Scottish team with the overall score being 1-9. Daniel picked up a win for the team against Ireland number 2, Matthew Mooney.

The last game of the team event for both girls and boys was against Wales – both matches were a bronze medal match. For the girls, as always, it was an entertaining affair. The standard of both teams was equal standard. The match had us all on edge as it went back and forth the whole way going into the last 2 games at 4-4, needing 2 wins to clench the victory. In the last 2 games, we lost the first 1-3 but bounced back in the last match of the day in a thrilling fifth setter winning 3-2 bringing the overall score to 5-5.

As the result finished in a draw, there had to be a countback. The final result for the bronze medal was announced as Scotland in 4th place and Wales in 3rd with the difference of only 1 point!

The boys came out fighting to retain their bronze medal position that they won in 2018. They were on top form going straight into a winning streak with a 6-0 lead. The boys kept fighting on to take victory 8-2 and claim the bronze medal which was thoroughly deserved!

The singles event took place on Sunday. All players played their heart out and put in the effort. 5 out of the 8 players qualified through their groups and into the main draw and the other 3 progressed into the consolation event.

Daniel Tibbets qualified through his group in second place to then meet Ireland’s Sean Loughnane in the last 16. Daniel played some amazing table tennis and played some fantastic points. The match went down to the wire, but Sean stole the last set 11-9.

Jonathan Pan also qualified through his group in second place going into the last 16 against the number 1 Welsh Evan Williams. Evan proved to be too strong – result was 0-3.

Haydn Jackson topped his group getting a bye into the quarter finals where he took on Ralph Patterson of England where he lost out 1-3.

Hannah McDonell qualified in second place after taking out English number 2 Chloe Kay in the group stages. Hannah went through to the last 16 where she met Sasha Lewis of Wales but lost out 0-3.

Amelia Smolarek also qualified through her group in second place taking her into the last 16 against Seren Jones of Wales. Amelia proved to be the stronger player in this winning the match 3-0. In the quarter final Amelia took on Irish number 1 and number 1 seed of the girls event Anjali Singh. Both girls had an amazing match with some excellent points/rallies. The match went right to the very end where Amelia fought for every ball and come away with a 3-2 victory. Into the semi-final Amelia was up against 2018 champion, Ruby Elliott of Wales. Ruby was very strong and Amelia’s nerves got the better of her after a fantastic win in the quarters. Ruby ran away with the match 3-0. Amelia finished with a bronze medal – very well done!

Well done to everyone who was representing Scotland in Northern Ireland, you did the country proud!

Thanks to Terry McLernon MBE, Natalie Gallan and Lucy Elliott for all the hard work that was put in for our players over the weekend.