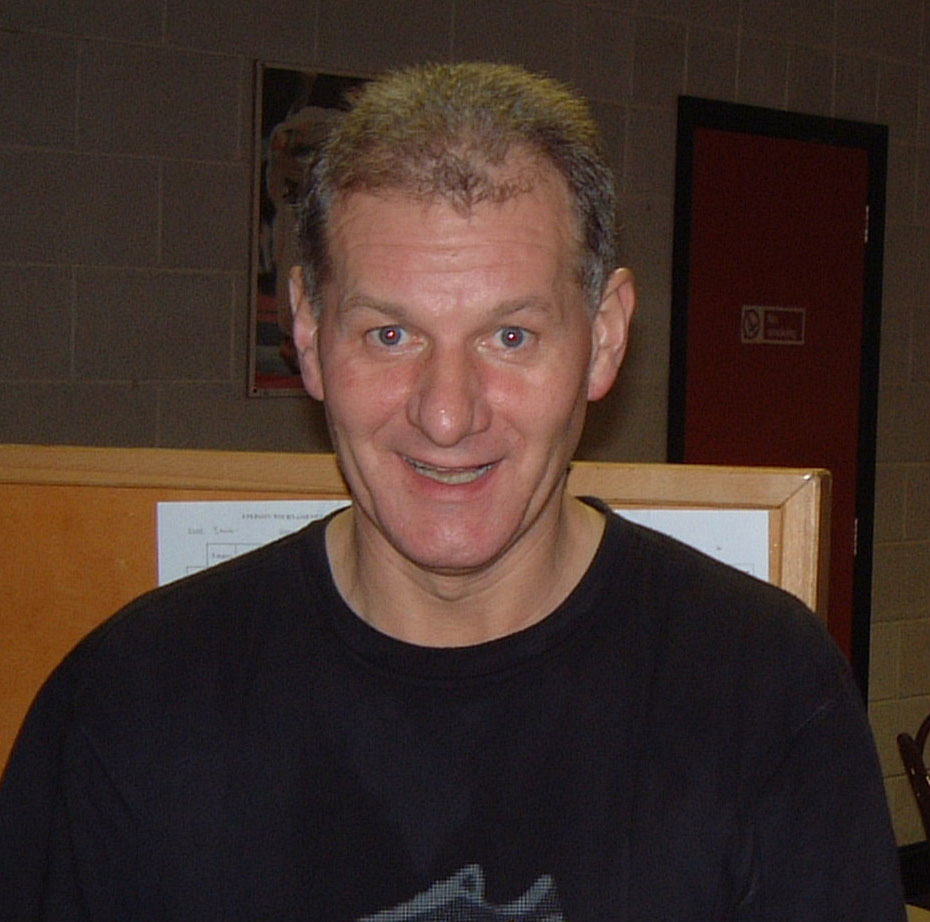 There will be sadness around the ELTTL and the wider Scottish table tennis community at the news that Alan Colliar has died after a long illness. Alan died on the 17th of April – his 65th birthday.

Alan was for several decades one of the leading players in the region. He last played in the ELTTL for North Merchiston II in the 2012-2013 season, bringing an end to over 40 years of ELTTL play. His final league match was versus ESC I in March 2013 in which he beat Scott McKenzie and Thomas Grant but lost out to another of the leading ELTTL players of recent decades Graeme Sutherland. The season before Alan had achieved an impressive average of 87.5% in the Premier Division.

After retiring from league play he continued to practice at North Merchiston with friends and ex-teamates such as Donald Renton, Willie Mabon, Alan Nisbet and Eddie Scott. Eddie recalls that ‘Alan and I had a knock pretty much every week for many years until just a few weeks before his death, including once in the morning a while back before he flew off on holiday in the early afternoon! He always arrived bang on time and preferred keeping to a set practice routine’. Alan Nisbet relates that ‘I was lucky to be his Sunday practice partner for a good few years when I played for North Merchy I think round about year 2000. I’m sure he had about 6 different people on the go each week. I’ve never known anyone who practised as much as Alan!’. Lindsay Muir remembers Alan practicing regularly with Mike Maclaren and Colin Roberson at Murrayfield and friend and teammate Jeff Dalgleish describes him ‘a very hard man to get the better of who constantly practiced and strove to improve his game’.

Alan was towards the head of the averages in the top division of the ELTTL for at least 35 years, topping them in 1989 / 90. He also received the Division 1 award in 1976/77 and 1984/85. Alan was awarded the prestigious Kirkwood Trophy at the 1999 ELTTL AGM on the back of his superb league record; winning 84.30 % of his 1343 matches up to the end of the 1998-1999 season. Prior to his long association with North Merchiston, Alan started his table tennis journey with Pentland Community Centre in the early 1970s before joining Tynecastle Boys Club. One of his clubmates Jeff Dalgleish recalls that he and Alan, aged 14/15, ‘were probably one of the first few to be coached using the “Stiga” ball machine that could fire balls at you with all kinds of spins and trajectories-that was at Helen Hamilton’s house in Grove Street’.

Alan was subsequently a member of the Tynecastle club based first near Tynecastle School and then at Balgreen Primary until it closed after the 1990/91 season.  Alan was the last secretary of the Tynecastle club that broke Gambit’s stranglehold on Division 1, winning it four seasons in a row from 1982/83 to 1985/86 and again in 1988/89. Alan, Willie Mabon, Jeff Dalgleish, David Campbell were Tynecastle’s key players during this period. Alan, Jeff and Willie subsequently moved on to North Merchiston where, along with Donald Renton & Colin Grey, they picked up more Division 1 titles.

His highly effective playing style was characterised by fast spinny serves and rapier attacks. Eddie Scott describes outlines that ‘he used short pimples mostly on his backhand but was very able to switch and hit with it on his forehand. His hits were very flat and I’m sure this was reason why he seemed to get maybe a few more nets and edges than average! He was great tactically, using angles and variations in speed and spin to probe weaknesses in his opponent’. Eric Henderson described Alan as ‘an all out attacking player with an exceptional forehand topspin’.

In the Edinburgh Closed Championships he won the Veterans’ event a number of times. Alan played on the Vets circuit winning several tournaments and played in the Scotland team alongside legend (and 4 times Scottish champion) Bert Kerr of Gambit TTC. At the Scottish level Alan produced some strong performances. In the September 1983 Scottish Senior ranking list he was placed 8th in a list featuring high quality players such as Richard Yule, David Hannah, John Broe and Brian Wright. Alan reached a highest ranking of 12 in Scotland a considerable achievement in 1984. According to Willie Mabon, ‘at the 1979 Commonwealth Table Tennis Championships at Meadowbank, Alan won through the hard-qualifying rounds and was presented with a bye in the later stages to be the only Scot left in the competition alongside Scotland number one Richard Yule’.

Alan was also an able and committed tennis player with a long association with Mortonhall Tennis Club and also played at Craigmillar Park Tennis Club and Murrayfield Tennis Club. Mortonhall membership secretary Ann Crawford relates that when she first joined Mortonhall Tennis Club 20 odd years ago ‘he was then the man to try and beat in our club tournaments as he kept on winning them!’. According to Jeff Dalgleish ‘Alan must have joined Mortonhall around 85/6 or so as he used to get so frustrated not being able to beat me, but typical of Alan in time he improved and found his way of playing singles with his devastating forehand and clever court coverage’. Alan was a fixture at Mortonhall for 30 odd years, first winning the club tournament in 1988 and at least 14 other times since.  David McCaul describes him as ‘one of the best and by far the most successful men’s player ever at Mortonhall Tennis Club’. Fairly impressive for someone who only began playing in his thirties. McCaul relates that ‘Alan was initially a novice to tennis though he was an extremely accomplished table tennis player.  It was fascinating to see how his entirely unique style of playing tennis developed given that he was having to adapt his table tennis game to entirely new strokes’.

‘stubborn doesn’t start to describe his attitude on court. Although ultra competitive, he was also the fairest person on court, always giving the benefit of the doubt to the opponent when giving close line calls. A man of few words but you’d always know when you’d hit a good shot either as his partner or opponent because you’d get a quick nod of the head and ‘good’. And he was always gracious in defeat on the odd occasion when he did lose a singles match. And if you ever passed the club when it was pouring rain and saw someone playing…it was invariably Allan. He will definitely be missed at Mortonhall’.

Alan was born in Glasgow and subsequently moved to Annan with his family. At about 6 years of age the family moved to Edinburgh when his father was appointed manager of the Edinburgh Engineering Apprentice Education College. He attended Boroughmuir High School for 4 years before leaving to take an apprenticeship as a furrier in the Dominion Fur Company where he worked for many years. With the demise of the fur industry Alan secured a job with a Scottish outfitter where he specialised in the manufacture of Sporrans to accompany the kilt. He worked for many years for W.E. Scott and Son the sporran maker in Causewayside. Even while getting chemotherapy he still worked a couple of days per week.

Alan married Moria in Morningside with Willie Mabon his best man and had the reception at the Ettrick Hotel which, as Willie Mabon relates was ‘one of his favourite places for a refreshing pint after a table tennis match’. As well as an eclectic taste in music he enjoyed regular holidays abroad with his wife Moira; had to be flying from Edinburgh, all-inclusive and have tennis courts. While Moira read books by the pool Alan was played the pro/ other guests who could give him a good game. Alan had a great interest in all sports, particularly tennis, and would watch on Sky Sports until the early hours of the morning. Alan was an only child and is survived by his wife Moira.