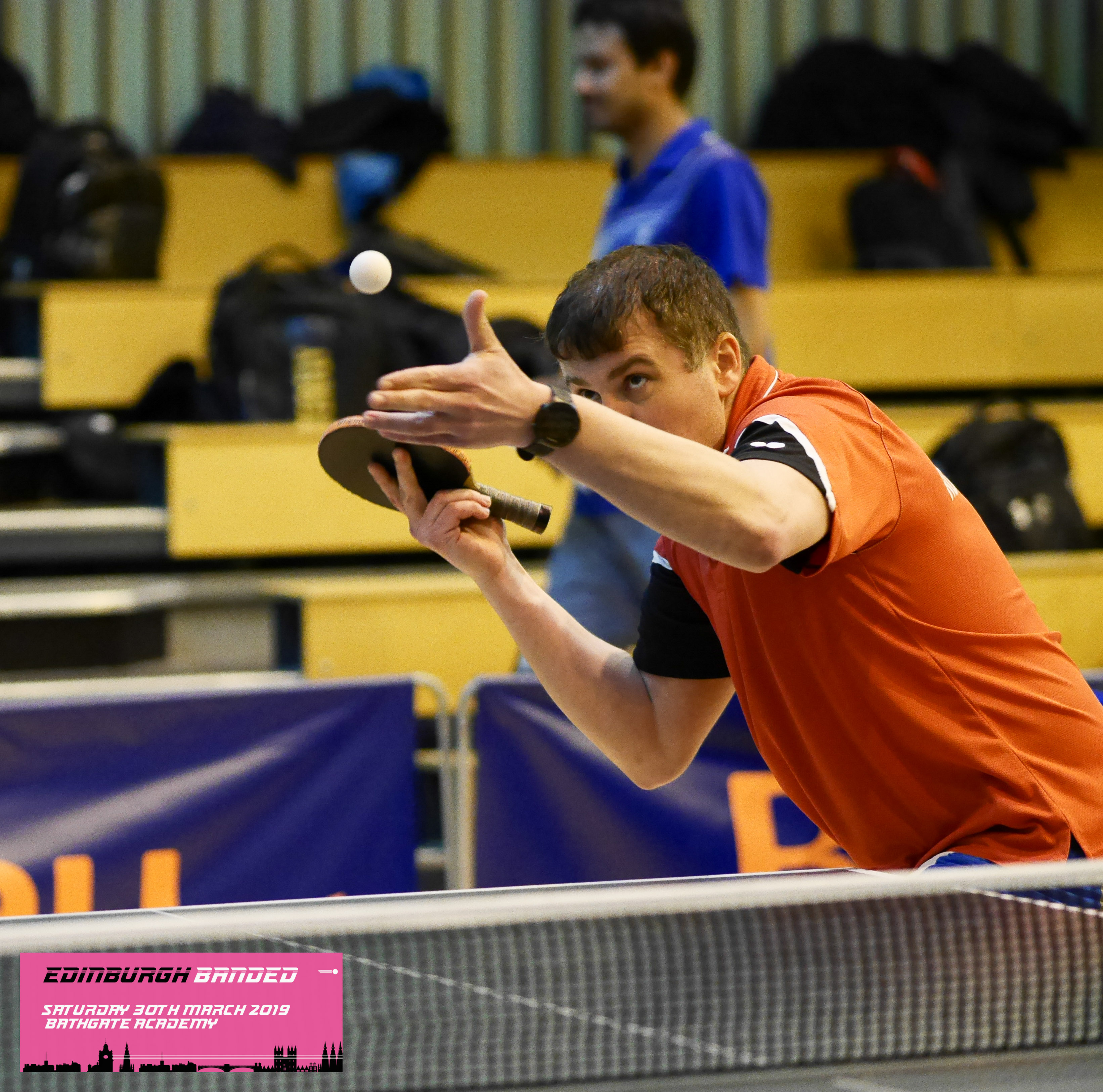 Robert Toth claimed the Band 1 trophy at the final Edinburgh Banded event of the 2018-19 season. In total 59 players (there were a few last minute call-offs) competed in 7 bands at Bathgate Academy.

Fresh from his victory in the Edinburgh championships Gordon Muir recovered from a loss in his first match (vs Glyn Eggar) to take the event to a final deciding match. Muir was particularly impressive in his victory over Charlie Morton where’s his variety of spin helped him to overcome his younger opponent who himself contributed well to a fine match (5, -14, 10, 2).

Toth was naturally pleased with his win but had found it ‘really tough’ with a number of difficult matches. He generally ‘didn’t feel comfortable’ with his attacking game and was often missing his big shots so reined himself in. In fact, he felt that on occasions he played a bit too safely and allowed his opponents to take the initiative. Toth was somewhat relieved to win several tight matches especially after a disappointing set of results at the Inter-league in Perth. Indeed twice he reached 6 all in the 5th only to take the next six points with impressive calmness. Though it didn’t go to a fifth set he felt his toughest match was against Gordon Muir; ‘I was scared that if it had gone to a 5th set I would have lost as I was getting too cautious and Gordon was playing well’. Certainly the final was on a knife-edge in the third set when Muir had an excellent chance to take a 2-1 lead. It was equally tight in the fourth and it was only a fine edge which took Toth over the line as the 4th went to deuce (-9,8,10,10). Muir was ‘happy’ to end his ‘first full season back playing on a high’.

Toth’s match against Charlie Morton was also a real humdinger with both players becoming animated but the rallies they produced were some of the best of the day. Morton did well to recompose himself in his next match to defeat Glyn Eggar 3-1 in a good tussle. Morton then went on to claim 3rd place and Eggar 4th.

In Band 2 Peter Aird was undefeated as he finished ahead of the ever consistent Rafal Wilowski who never seems to leave a banded event empty-handed! David Hay won Band 3, suffering just 1 loss as he finished narrowly ahead of Andrew Nimmo. Forbes Stirling impressed in Band 4 which he won ahead of Banded regular Robbie Mcintosh. Haydn Jackson and Charlie McGowan produced some superb play in their Band 5 encounter: McGowan coming out on top on this occasion and finishing runner-up to South Ayrshire’s Kris Taylor who played well all day. Jacob Munro won all his 8 matches to top Band 6, while local lad Jamie Toner overcame some anxious moments to take Band 7 above Euan Walker. Kieran Walker was selected as player of the day particularly on account of an amazing comeback versus Masoud Nowbaveh in which he recovered from two sets to love down and then 10-4 down in the fourth which he then went on to win 15-13 before clinching the 5th with some degree of comfort. Another epic saw Steve Collins beat Jamie Mullineaux 19-17 in the 5th in Band 3 ( 9,-8,8,-6,17).

Thanks to all those who took part this season. Look out for more ELTTL Banded events next season.

Particular thanks are due to:

Dave Fairholm – tournament referee for helping things to move smoothly.
Yuhuan Wang who lead things on top table with impressive efficiency.
Umpire of the day Lara Stirling who helped enormously by umpiring a number of matches.
Julie Jackson who set up and ran the spot the ball competition.
And of course, Gordon, Graham, Lindsay and Lorna Muir for tournament organisation.