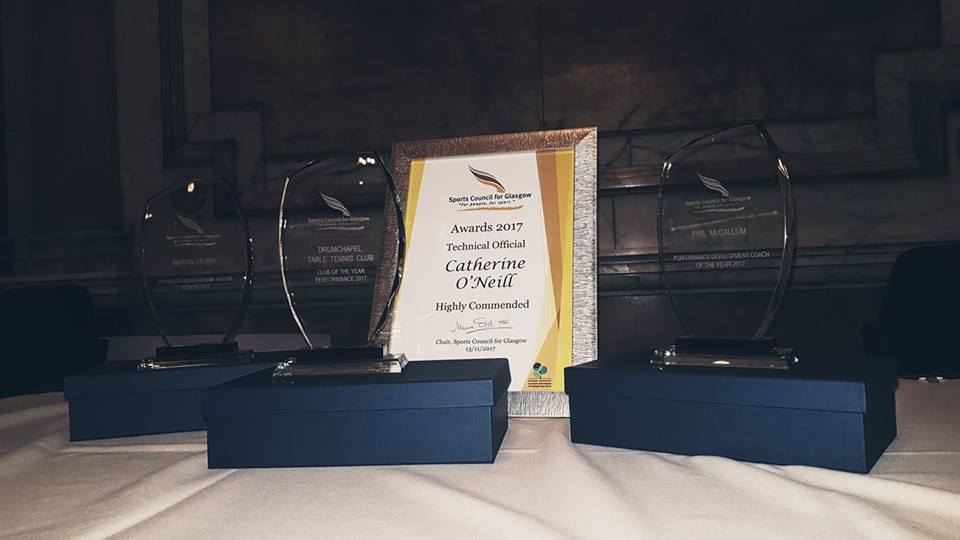 Drumchapel Table Tennis Club was nominated for 4 awards and left with 4 awards in a clean sweep.

Drumchapel Glasgow Table Tennis Club has had a tremendous year in terms or reaching the pinnacle of our sport at national at British Level. The club secured the Scottish National League title being undefeated throughout season 2016-2017.

Drumchapel Glasgow Table Tennis Club also achieved a historic double as it was crowned British National League Champions for the third time and were also undefeated throughout season 2016-2017.

Drumchapel Glasgow Table Tennis Club has qualified for the European cup and this will take place in November/December 2017.

Phil McCallum has been working with performance development players for the past 15 years. Over this time, he has worked with and coached 21 National Champions and has coached successful teams at international level from Under 12 through to senior level. He has also been non-playing captain at every age level including Primary Schools International, Junior, Cadet and Senior 6 nations, World, European and Commonwealth Championships.

He is a current UKCC Level 2 coach and has is currently studying the UKCC Level 3 for Table Tennis. He was also part of the GB selection panel which selected teams for London 2012, Rio 2016 and was Director of Performance for Table Tennis Scotland from 2012-2016.

Catherine is one of the West of Scotland’s top volunteers and officials. She has been a volunteer at the 2009 Commonwealth Table Tennis Championships in Glasgow, 2012 Olympic and Paralympic Games in London, 2014 Commonwealth Games in Glasgow. She is also a national umpire and has recently completed her tournament official course level 2 and now travels to officiate at events across the UK. Catherine volunteers on a weekly basis to help ensure that competitions run smoothly as well as transporting teams across Britain. She has also been umpiring in the Junior British League, Senior British League (Premier Division) and English 4 star junior events. She has recently been an official at the UK School Games in Loughborough

Martin Perry has continued his excellent progress this year which has saw him win the US Open and has a world ranking of 18. He has reached the semi finals of several para pro tour events in Germany and Slovenia, and also won a bronze medal at the world team para championships.

Due to his progress he is now part of the British Performance programme for Tokyo 2020 and is based full time at the English Institute of Sport in Sheffield.

Martin is truly and inspiration to everyone