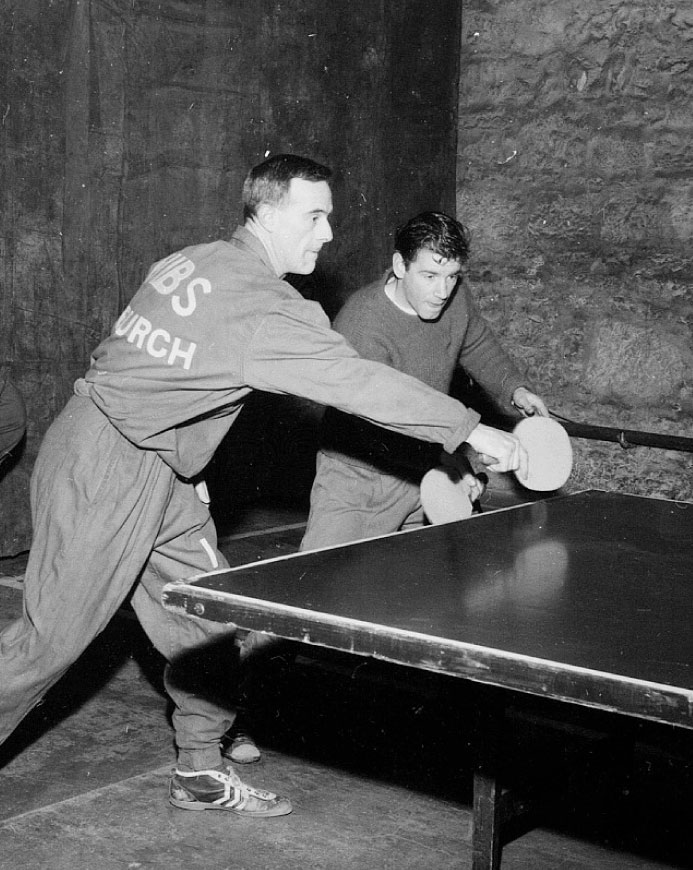 I was on top of Craiglockart Hill on Sunday 7 June enjoying the view over Edinburgh when my old friend Eric Sutherland rang to give me the sad news that his first coach and mentor, Bert Kerr, had just passed away. Many of you will have read Eric’s lovely personal tribute to Bert and the superb piece written by Charlie Ellis recording his long and illustrious career. In common with many players of my generation, Bert’s passing generated an outbreak of reminiscing and the recalling of many fond memories.

Imagine my surprise and delight therefore on reading the Edinburgh Evening News later that week to come upon a page of photographs dedicated to table tennis from 1962 and 1963 including one of Bert and another top Edinburgh player Dave Hogg!

The Evening News caption contains some inaccuracies including describing Bert and Dave as Church of Scotland Youth Leaders! It`s a classic local newspaper photograph however which captures the mood, fashion and haircuts of the time. Seated in the front row to the right of what can barely be described as a net are the wives, Liz Hogg and Pat Kerr. To the left of Liz sits the unmistakable figure of Alan McKean from the North Merchiston Boys Club (Alan has been an invaluable supporter of table tennis at “the Merchie” for many years and is still I understand on the Board of Directors at the club). Sitting next to Alan is a young lad who, having just finished a gymnastics session at North Merchiston, was dragooned by Alan to come along to support this exhibition in a church hall in Kings Stables Road below Edinburgh Castle. Later that same year the young lad, who took part in football and gymnastics at the North Merchiston Club, moved with his family to Manchester where he joined the YMCA and took up table tennis in earnest. Four years later this same young lad would return to Scotland and become Scottish Mens Singles Table Tennis Champion in 1967. Look out for more stories from Brian Kean who will be featuring on Dave Fairholm`s excellent Monday night Zoomcast in a couple of weeks! 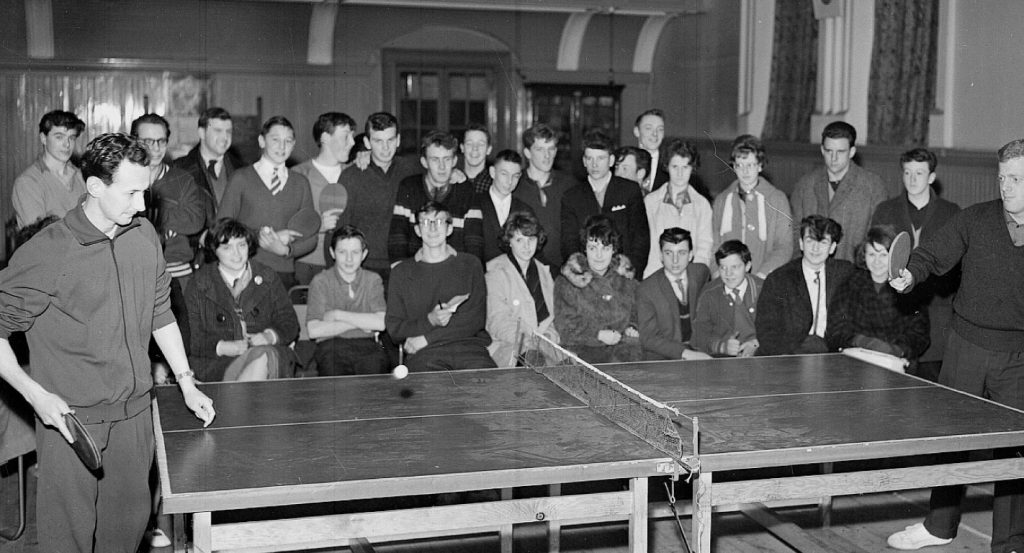 Bert Kerr and Dave Hogg give a demonstration in Edinburgh, 1963

Football fans will be intrigued by the photo taken at a Boys Club in the Pleasance in 1962. This features professional footballers Gerry (not Gary) Baker and goalkeeper, Ronnie Simpson. Gerry was one half of the fabulous Baker brothers who both enjoyed successful careers. In 1962, Gerry`s younger brother Joe made the headlines as one of the first British footballers to play in Italy when he signed for Torino to play alongside Aberdonian and Manchester United legend Denis Law. Gerry scored a hatful of goals for Hibs and was later transferred to Ipswich and eventually was selected to play for the USA in their 1970 world cup qualifying campaign.

Goalkeeper Ronnie Simpson was one of my boyhood heroes. In 1962 Jock Stein was manager of Hibs and actually let Simpson go only later to sign him for Celtic when he was putting together the legendary Lisbon Lions team of 1967. Ronnie was also in goal for Scotland`s legendary 2-1 win in 1967 against England. It was England`s first international match after their famous 1966 World Cup victory. Needless to say, following this win Scotland`s ever modest fans claimed the right to be hailed unofficial 1967 World Champions!!!

Ronnie Simpson and Gerry Baker at the Pleasance, Edinburgh in 1963

It was not unusual in those days to find professional footballers playing table tennis in local clubs and leagues around the UK. In 1963 when I began playing at the Triangle Club, the Aberdeen goalie, John “Tubby” Ogston played every week for the Triangle Club B team. Another table tennis goalie, Johnnie Low, played for Aberdeen and then went on to hold the record for the most appearances in Highland League history for Buckie Thistle. Johnnie also became a very successful business man and amongst his many ventures became famous as the Harry Ramsden of the North East building up the highly successful Ashvale chain of Fish and Chip restaurants.

Many of you will know Johnnie’s nephew, David Low, talented coach and valued sponsor of the Aberdeen Sport Village Academy Squad. David, now also a successful businessman, still finds time to coach every week and played an important role as coach and sparring partner to our new Scottish Champion, Colin Dalgleish, when he was studying in Aberdeen. David was a very talented young player in his own right and as his NPC I remember him representing Scotland with distinction and challenging the very best at the European Youth Championships.

Sadly, Bert Kerr, Dave Hogg, Ronnie Simpson and Gerry Baker have all now passed away and I don`t have the names of the two young women enjoying a game of social table tennis. Let’s hope they are still enjoying a good quality of life and able to look back with pleasure on those halcyon days of the Swinging Sixties and some great fun playing our sport in Princes Street Gardens in 1963 (below). 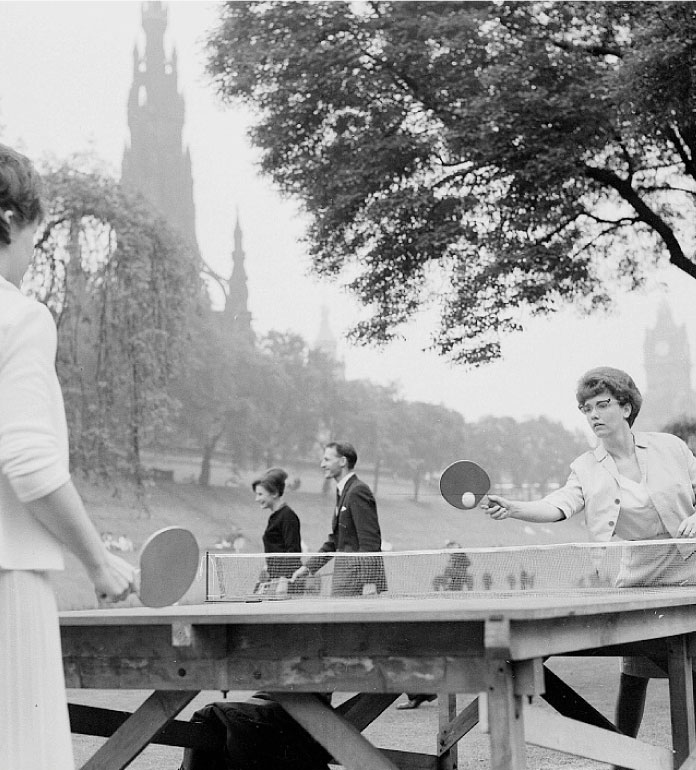