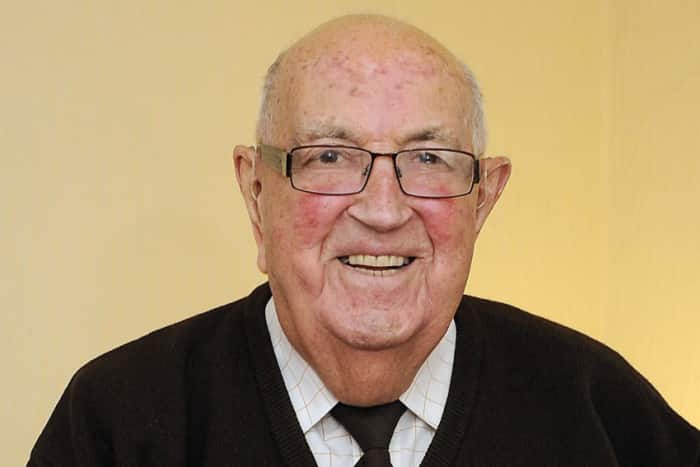 It is with great sadness that we announce the passing of Ken Waddell following a mercifully brief battle with cancer. Ken died on Saturday 17 November at Strathcarron Hospice surrounded by his family. He was 85 years old.
Ken, together with Alec Dalrymple and Harry Crawford made up a unique trio of fathers at Falkirk Table Tennis Club. Carole Dalrymple, Gordon Waddell, Martin and Stewart Crawford would all go on to achieve international honours for Scotland.
Ken was a lovely man and one of life`s true gentlemen. His funeral service will take place at Falkirk Crematorium on 28 November at 3.15pm.
Here are some reflections from his son Gordon.

In his professional life, my dad was the Editor of the Falkirk Herald for 21 years until he retired in 1991, the longest-serving editor of the biggest local newspaper in the country.
He was a fierce campaigner, advocate and fundraiser for the community, and despite offers to leave for national titles, he always stayed put because he loved what he did in Falkirk.

He first took me to Falkirk table tennis club in 1977 – I was coming up for 9 years old – after I’d shown an interest playing on a summer holiday in Spain. He knew Alec Dalrymple through work, and knew he ran the club at the Drill Hall.
Fate also turned up that night when Martin Crawford walked through the door for the first time with Harry. The dads got on like a house on fire, as did the kids, and we virtually never left the place for the next decade.
Alec, Harry and my dad all made sure the place ran like clockwork – the club was thriving at the time and took a fair bit of running, but the three of them eventually took the plunge and put a team in the league together, a dads’ army whose collective age probably topped the rest of their division put together. Alec worked for a biscuit company at the time (Jacobs, maybe?) and used to reward them for wins with treats!
He used to make sure table tennis always got a massive show in the local paper, printing league results, tournament stories, keeping everyone in the league happy with mentions they’d never previously had, and was a regular contributor to the old Bulletin that Dennis George ran for us all throughout the 70s and 80s.
He loved going to tournaments – I think back to all those years of Harry and my dad, traipsing around Britain after us, sitting drinking rotten coffee and eating stale sandwiches in every sports centre in the country from first thing in the morning til last thing at night – and never a complaint. It’s only really when you think about that now and you have kids of your own that you truly appreciate what people do for you sometimes.
He loved the craic with the likes of Andy Fleming and the other parents, loved watching the games, and even after I came back to the game 25 years on he was full of questions about who was still around, how they were playing, and thrilled to hear that the likes of Brian Wright, Pete Shaw, Callum Gerrard, Charlie Brown and obviously the local guys like Gerry Campbell and Stuart Fowler were still about. Think he was disappointed that Stokesy had never made a comeback – he loved Ian’s gallusness!
Sadly Harry passed away in 2010 obviously, but my dad and Alec still stayed in contact and saw each other regularly as keen members of Falkirk Probus Club right up until his last few weeks.