Junior Nationals Round up

The players, coaches, officials and spectators gathered for day two of the National Championships. Like the previous day it was a cold frosty morning in Perth and it was a very busy Bells Sports Centre with the Scottish Gymnastics championships taking place in the main arena and a rugby festival on the North Inch. The fair city certainly was the hub of young sportsmen and women in Scotland over the weekend and it was time for the upcoming stars of our game to shine.

An entry of seventeen players split into five groups with the top two players moving through to the knockout stages. The Junior boy entrants you can argue had the most competitive field out of all the weekend with some interesting match ups ahead if the draw went to plan.

In the group stages group number two was an exact repeat of the October Championships where Charlie Morton, Nathan Hogg, Jacob Munro and Jamie Toner would all face each other again which proved to be a highlight in October. On this occasion it did go to plan for the two top seeds as Charlie and Nathan moved into the knockout stage where in what proved to be the group decider Charlie defeated Nathan over five sets.

Group Five was the standout on paper of the group stages as David Hay, Rayann Khalid and Charlie McGowan played out some great matches. David got things underway with a three set victory over Charlie McGowan. Rayann and Charlie had a fantastic match where Charlie took victory 11-9 in the fifth set. Rayann then found himself very unlucky as he again lost out in five sets this time, 11-6 in the final set against David.

In the other groups it was all about who would move through as the group winner or runner up. In group one Martin Johnson took the group with Andrew Nimmo as runner up. Borui Chen was the winner in group three and Kieran Walker was runner up. Jamie Johnson won group four and Harry Blackhall as the runner up.

The knockout stages began with two preliminary matches before the quarter finals. The first game saw Kieran Walker and Nathan Hogg take to the court which proved to be an excellent match. Like a lot of matches involving these two, going to five sets was inevitable and it was Kieran who ran out the winner taking the final set 11-5. The second preliminary match saw Aberdeen’s Harry Blackhall and Dundee’s Andrew Nimmo face each other for a place in the quarter final. It was Harry who would take the victory in three sets.

The quarter finals kicked off with Martin Johnson and Kieran Walker. Kieran took the first set however this fired Martin into action and he won the next three sets to take victory and move to the semi finals. Charlie Morton faced off against his doubles partner Harry Blackhall and it was Charlie who took the match in four sets. David Hay and Jamie Johnson played out their quarter final and these two have had some great matches at other events. On this occasion it was David who took victory and moved to the semi finals in four sets. The final quarter final saw another doubles partnership play each other as Borui Chen and Charlie McGowan battled it out for the last semi final place and it was Borui who would take victory in three sets.

Martin Johnson and David Hay played out a high quality semi final. David took the first set and his impressive form from the senior championship the day before was continuing however like his quarter final the North Ayrshire defending champion kicked into gear and managed to subdue his opponent and took the next three sets to end the Dundee youngster`s campaign and moved to his third Junior singles final.

Charlie Morton and Borui Chen played out the next semi final and Charlie dispatched Borui in three sets. Borui had an excellent day on the Saturday and was in great form however Table Tennis is certainly a game of styles and Boruis style suited the Glasgow South player and Charlie moved into his second consecutive junior boys final.

The final continued the theme of styles and Charlie’s style suits Martin’s game and he just could not get into the match against his opponent. Martin took the match in three sets and was ruthless to secure his third junior boys title in a row. Martin certainly steps up to the big occasion and this was the case in this final.

The junior girls played out in one group containing number one seed and the ladies champion from the previous day Faye Leggett. Joining her were Holly McNamara, Shannon Brown, Jessica Hogg and Megan Mulhern.

This group played out with little drama as only one match went beyond three sets where North Ayrshires clubmates Holly and Jessica played out a five set match where Holly took the victory. Shannon and Megan certainly have years to come within the junior girls and certainly show great potential however no one could get close to Faye as she came through the group to take another Individual title. Holly was our runner up with Shannon taking third place, Jessica in 4th place and Megan in 5th place.

The cadet boys were split into 4 groups of three players with the two top players moving through to the quarter finals. There was little trouble for the four players who made the semi finals as they all won their matches in three straight sets.

Semi-final number one saw Ben Hart from Stirlingshire match up against Dumfries Ruben De Silva. Ben moved through to the final in four sets after Ruben levelled the match at one set all, Ban took set three and four for the victory. Semi Final number two had Drumchapels Joe Mulhern take on Aberdeen’s Robbie Martin. Joe took the victory in three sets, always able to maintain a lead in each set to secure the win.

The final was a great match where both players showed great consistency and not allowing enforced errors forcing their opponent to win the point. Ben picked up set number one 13-11 and Joe replied to take set number two. Set number three was hard on Ben as Joe was in devastating form taking it 11-0. The young man from Drumchapel would simply not make an error. To Ben’s credit he rallied very well after the shock of set three and in set four was a close affair which Joe managed to take 11-9 and in turn the Cadet Boys title.

Like the junior girls event the cadet girls played each other in one group to determine the champion and it all came down to the final match between Megan and Maja. Both players overcame Kiishi and Nikki and Kiishi took the win over Nikki to win third place.

The group was decided as arguably one of the matches of the day in all the competitions that took place on the Sunday. Drumchapel club member Megan Mulhern took the opening set 12-10 and Maja Wojcicka from Aberdeen replied to take the second set. Megan then replied and took the third set over the higher seeded opponent. Maja showed great fighting spirit to set up a final set decider which the match certainly deserved. The final set went all the way to deuce and it was Megan who was able to keep her composure and seal the victory 13-11 and joined her brother Joe in becoming the national cadet champion.

In the semi finals Joe Mulhern went through in a very comfortable three sets. Semi final number two the all Aberdeen affair of Mathew and Jakub was a tussle and Jakub took the victory in four sets to move forward to the final.

In the final Joe’s consistent play was too much for Jakub and he took the victory in three sets.

Played out in a group of three players all from Aberdeen Maja Wojcicki who defended her title. Kiishi Adekola the runner up and Nikki Mo in third place.

The doubles event for the boys played out some fantastic matches. Moving through to the semi finals with a match of the round was the pairing of Nathan Hogg & Jacob Munro who continued their fantastic form from the previous day where they reached the semi finals of the senior competition. They won in five sets over last year’s beaten finalists David Hay & Andrew Nimmo. Joining them in the semi finals were Borui Chen & Charlie McGowan who had a tight three set match with Kieran Walker & Ruben De Silva. Johnson brothers Martin & Jamie had little trouble in getting to the semi finals to be joined by Charlie Morton & Harry Blackhall.

The semi finals saw the pairing of Charlie & Harry push the strong favourites all the way to five sets however Martin & Jamie kept their composure and took the final set 11-9. The other semi final saw the Edinburgh pair of Charlie & Borui end Nathans & Jacobs weekend as they ran out winners in four sets. The highlight of the match was certainly in set number one as remarkably it went to 17 all with the Edinburgh pair able to take it winning the next two points.

The final saw Martin going for his 5th Junior boys doubles title in a row and the second with his brother Jamie and that is exactly what they did as they surged to the win in three straight sets. The young Edinburgh pair were unable to get any traction in the match with Martin and Jamie stifling them at every turn.

This was a straight shootout to become the national junior girls doubles champions as Faye Leggett & Shannon Brown took on Holly McNamara & Jessica Hogg and it was Faye and Shannon who took the title winning the match in three straight sets.

The doubles brought an end to our Junior Championships and the weekend which was thoroughly enjoyed by the spectators. The National Championships certainly brings out the best in our players, as it should given the reduced number of events events on the calendar following the pandemic. Like the seniors it would be fantastic to see this current crop of youngsters face off against each other on more regular occasions.

A massive well done to all who take part over the weekend and a huge thank you to the volunteers who make this event possible with a particular thanks to Stewart McGowan his top table team and team of umpires. The hall looked fantastic as it always does in our venue in Perth and thanks has to go to our equipment sponsors Tees Sport. Next year with the planned changes to the Bells venue we move to the main arena where I’m sure the standard of play and competition will be as strong as always. 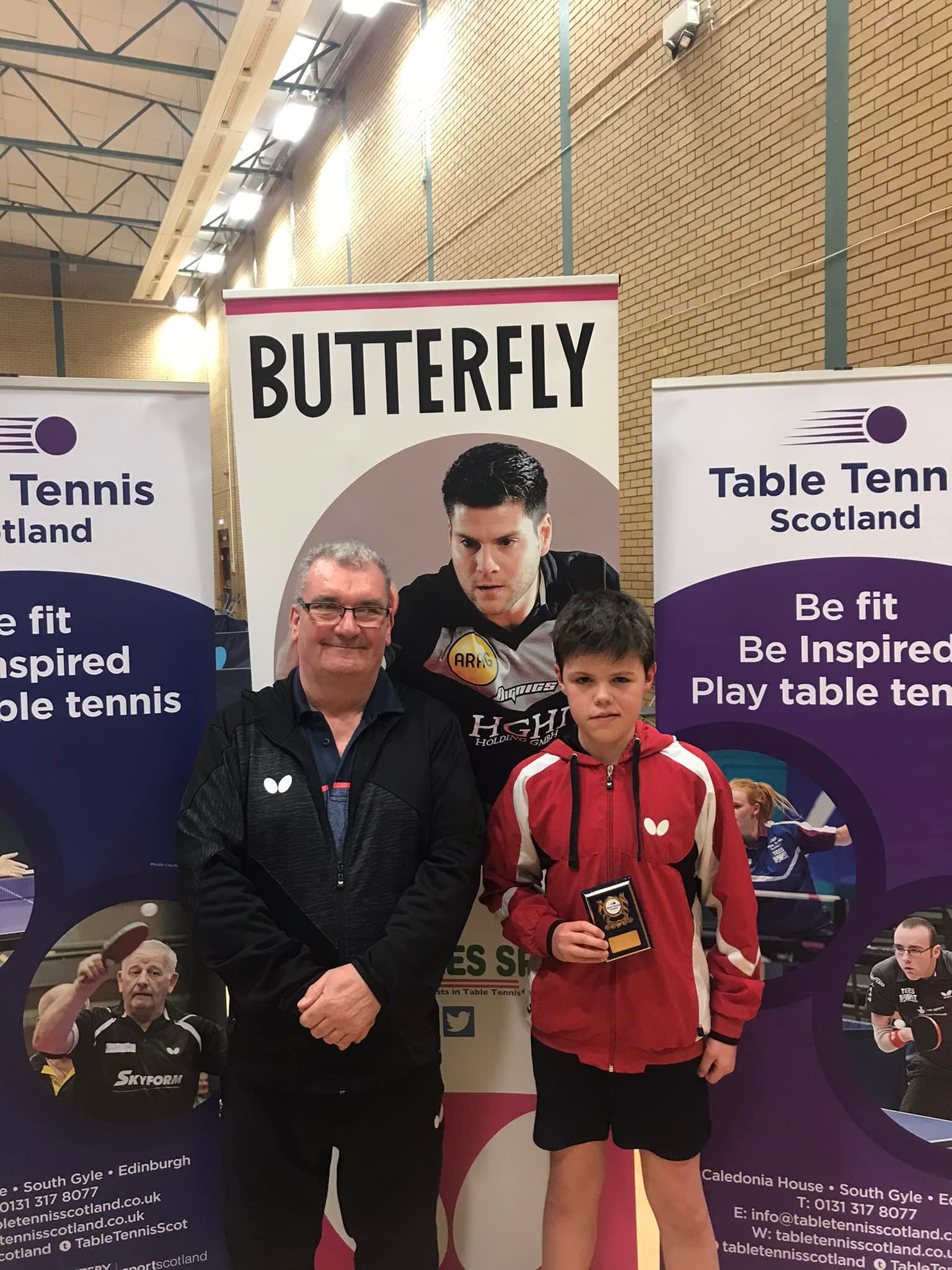 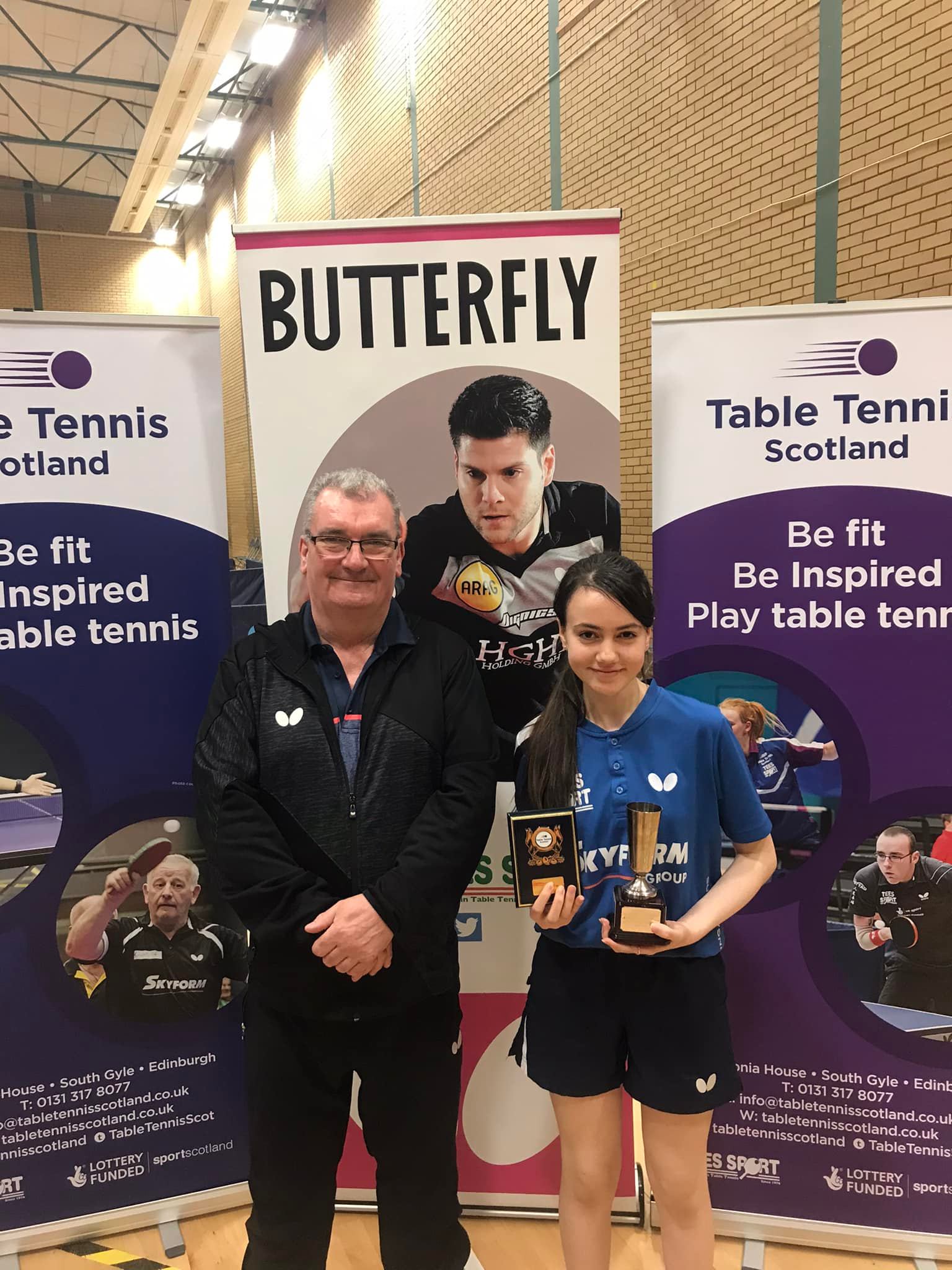 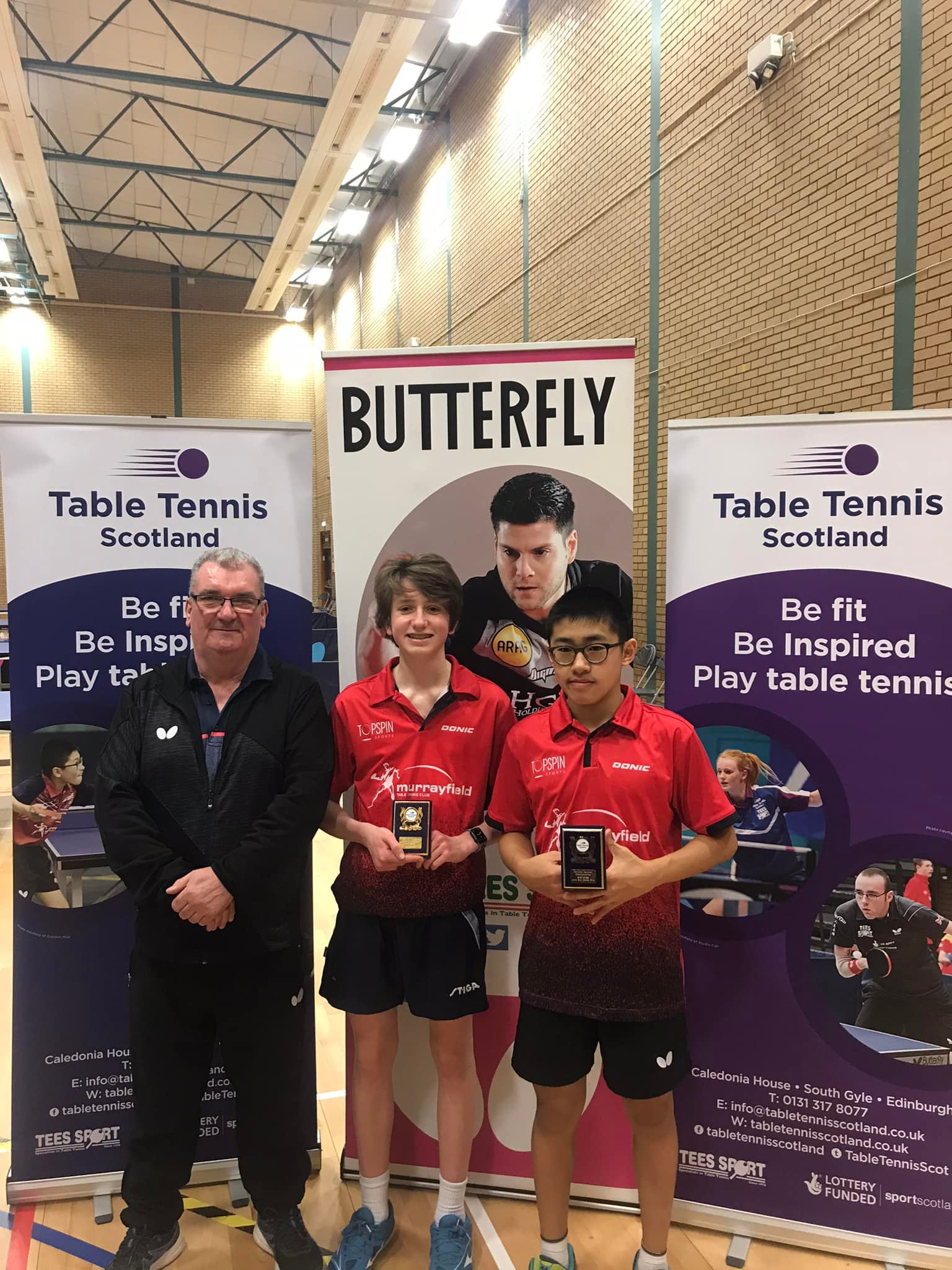 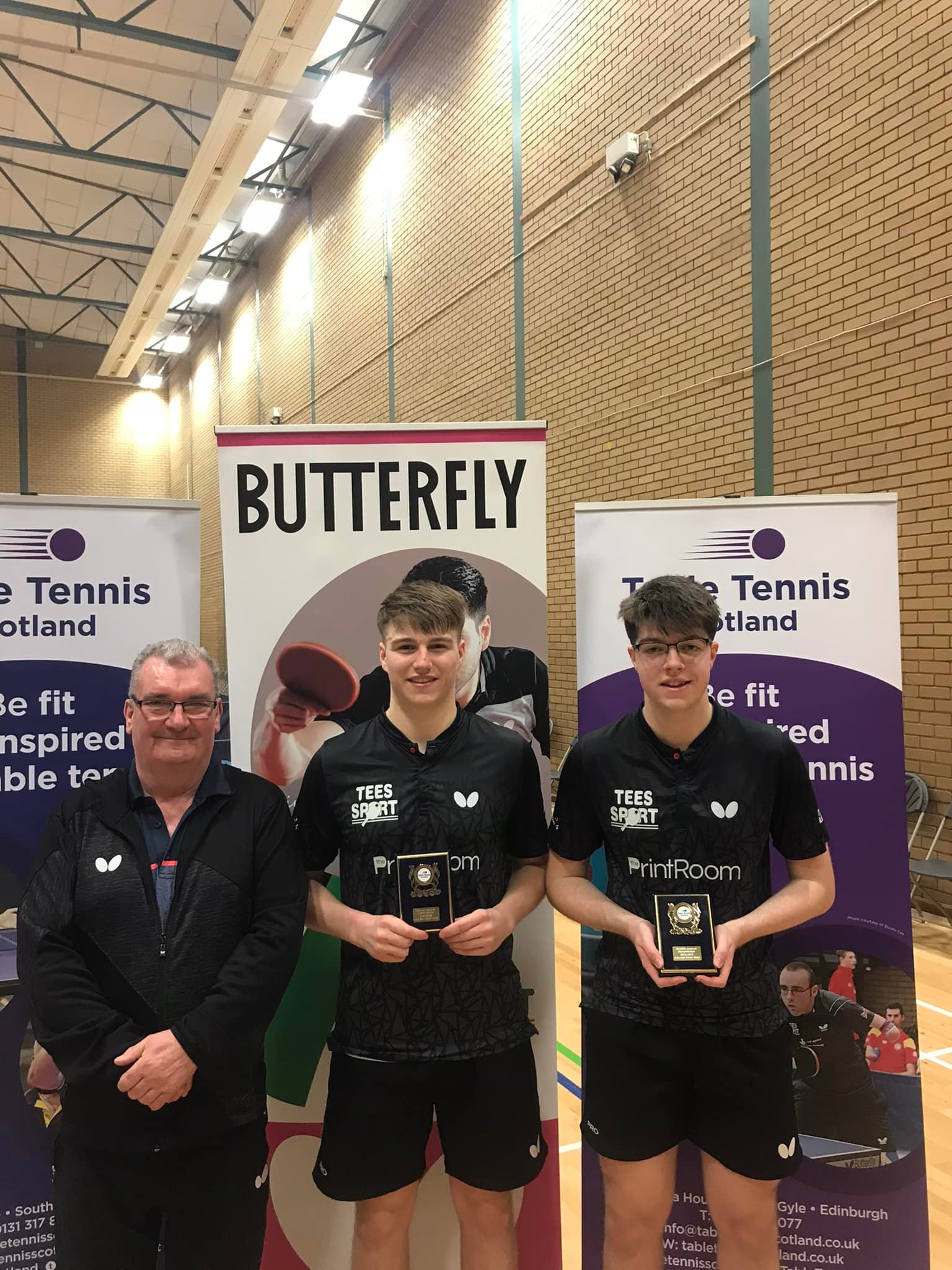 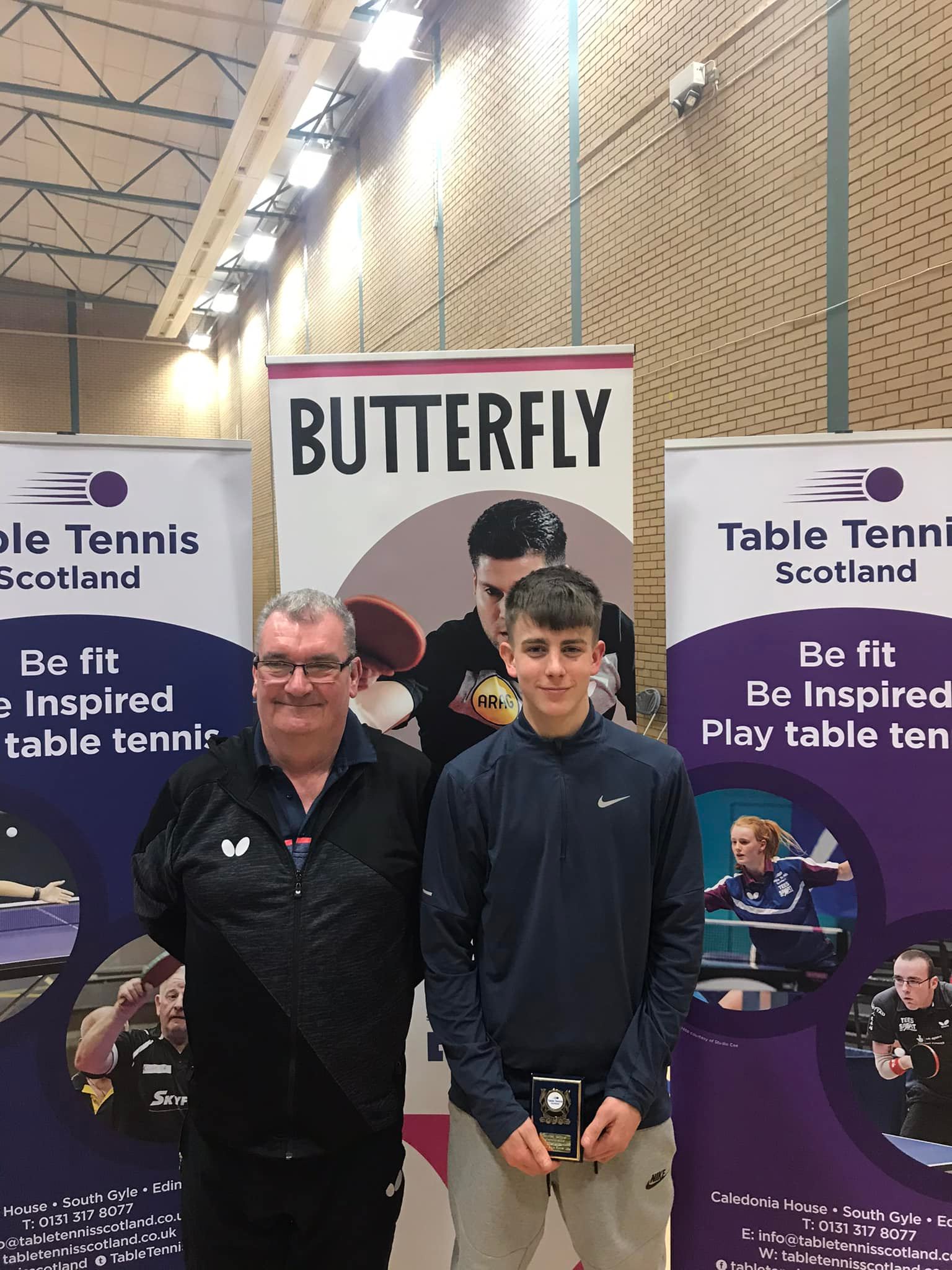 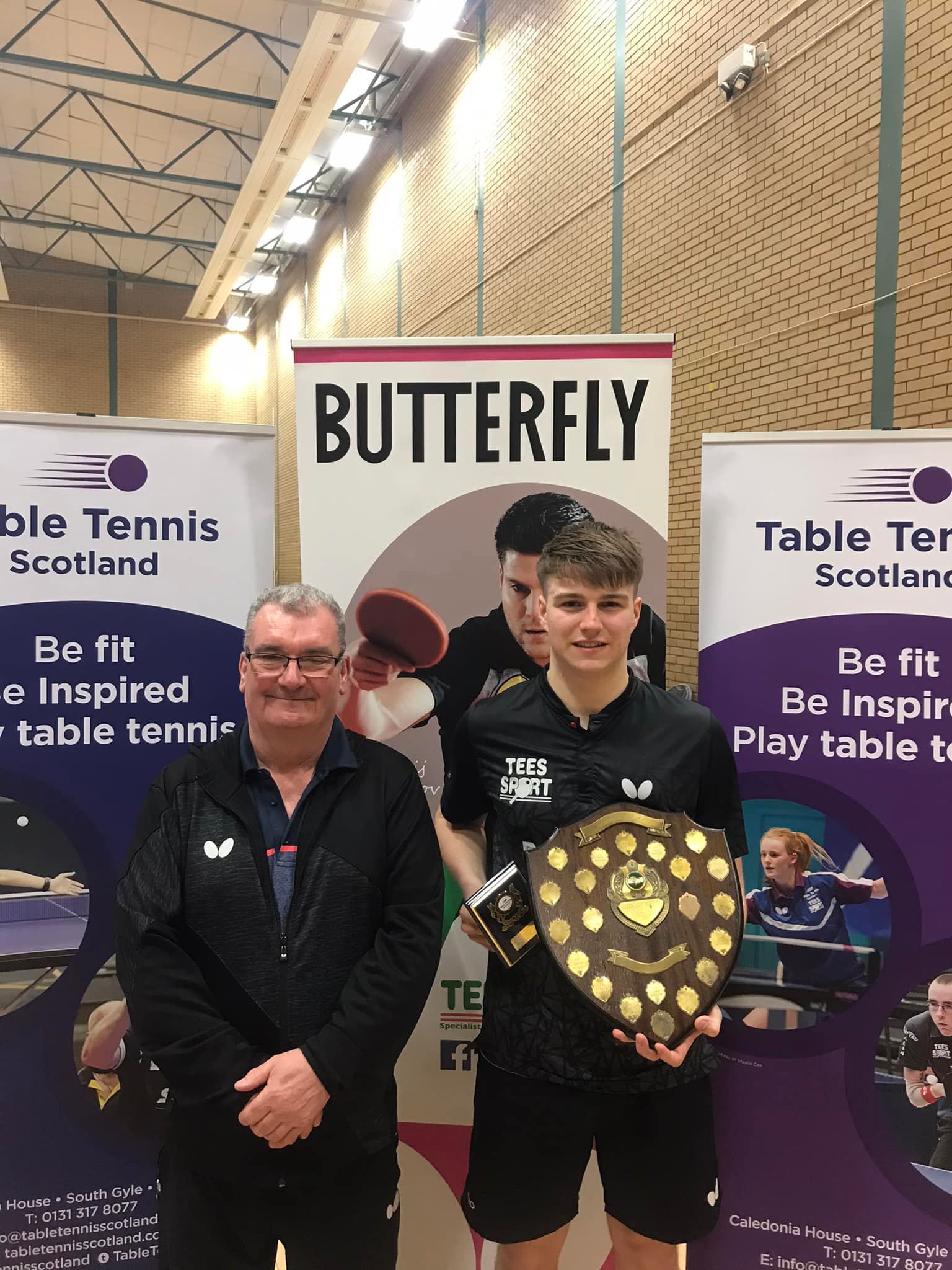 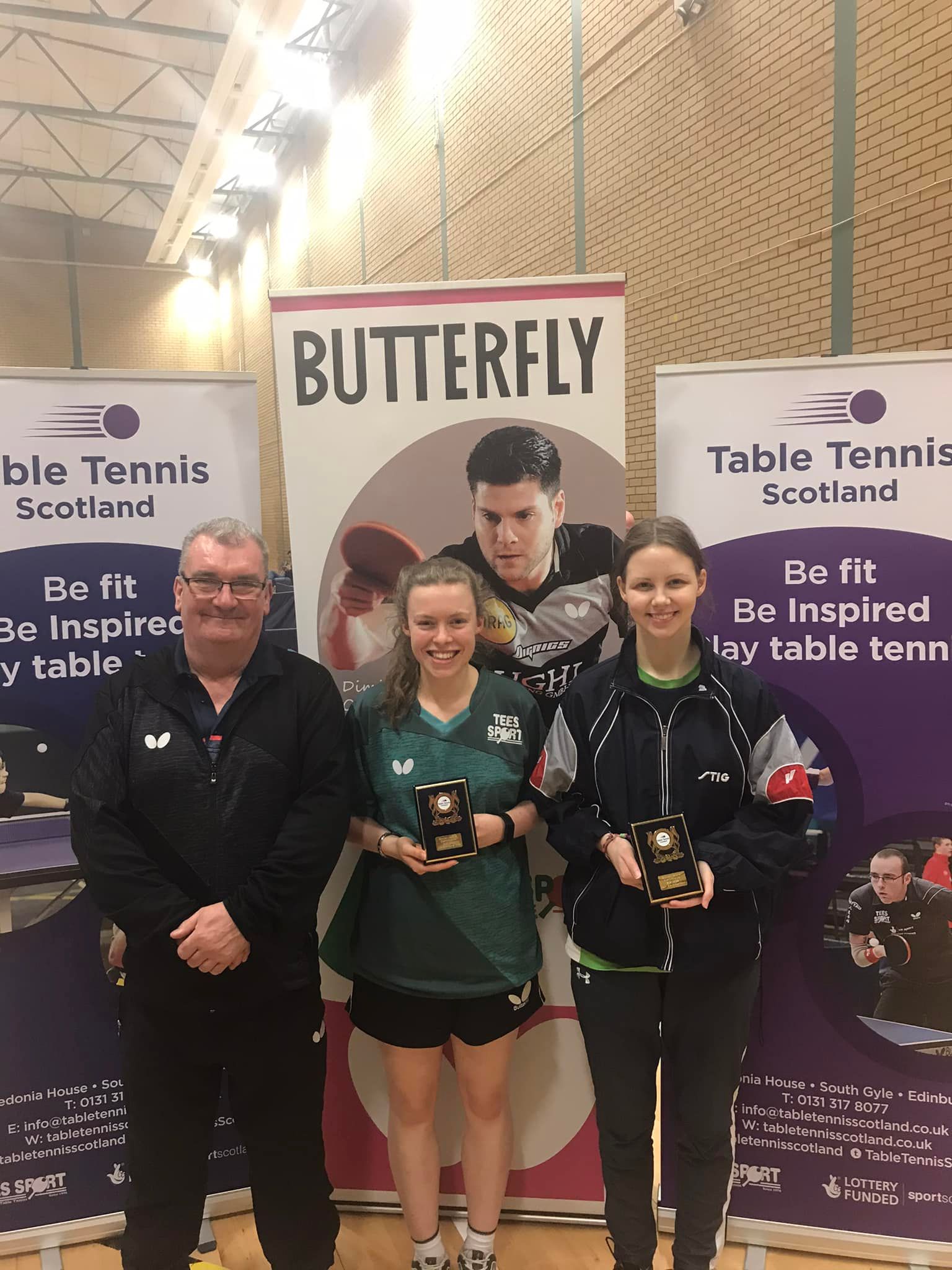 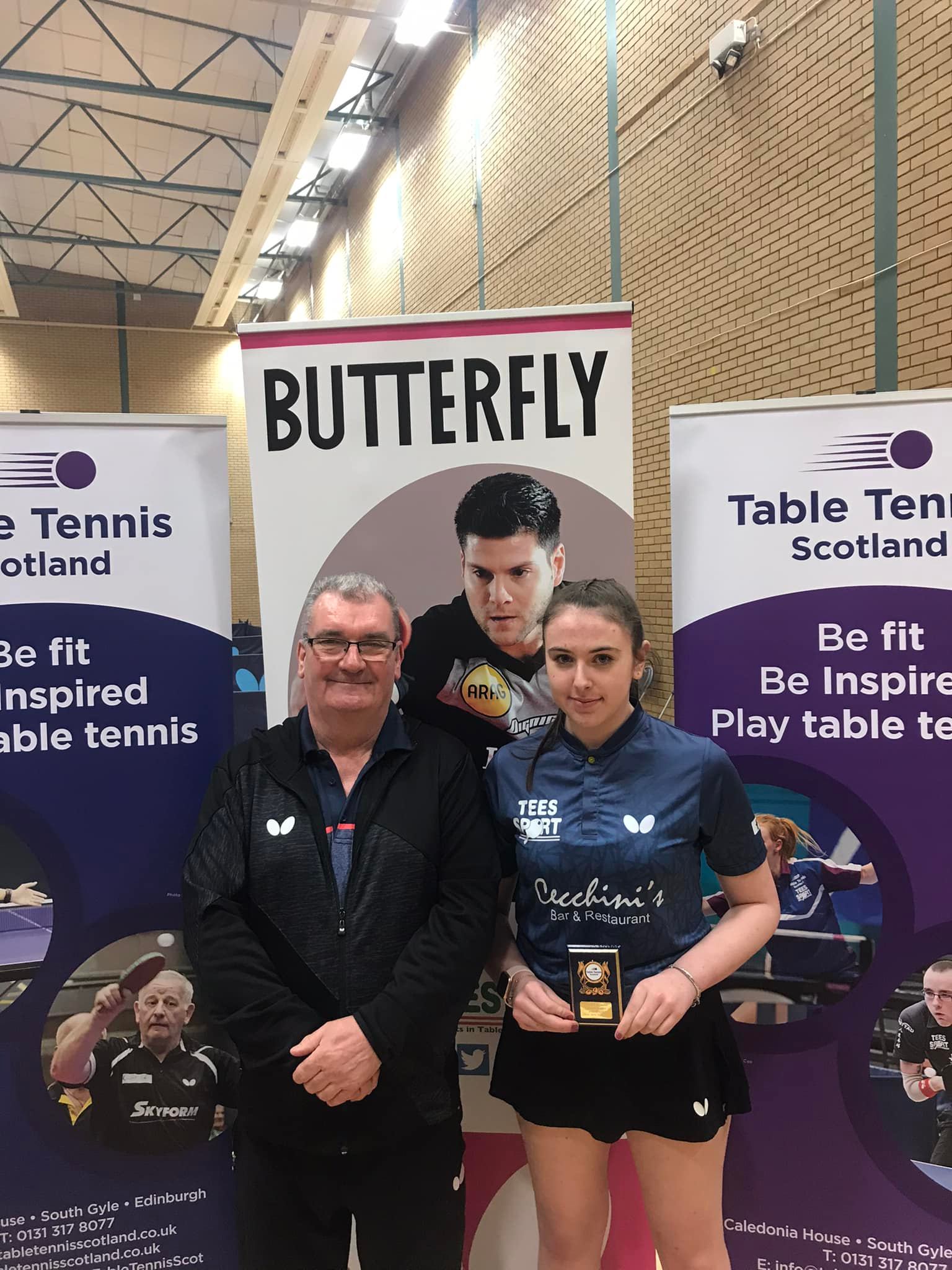 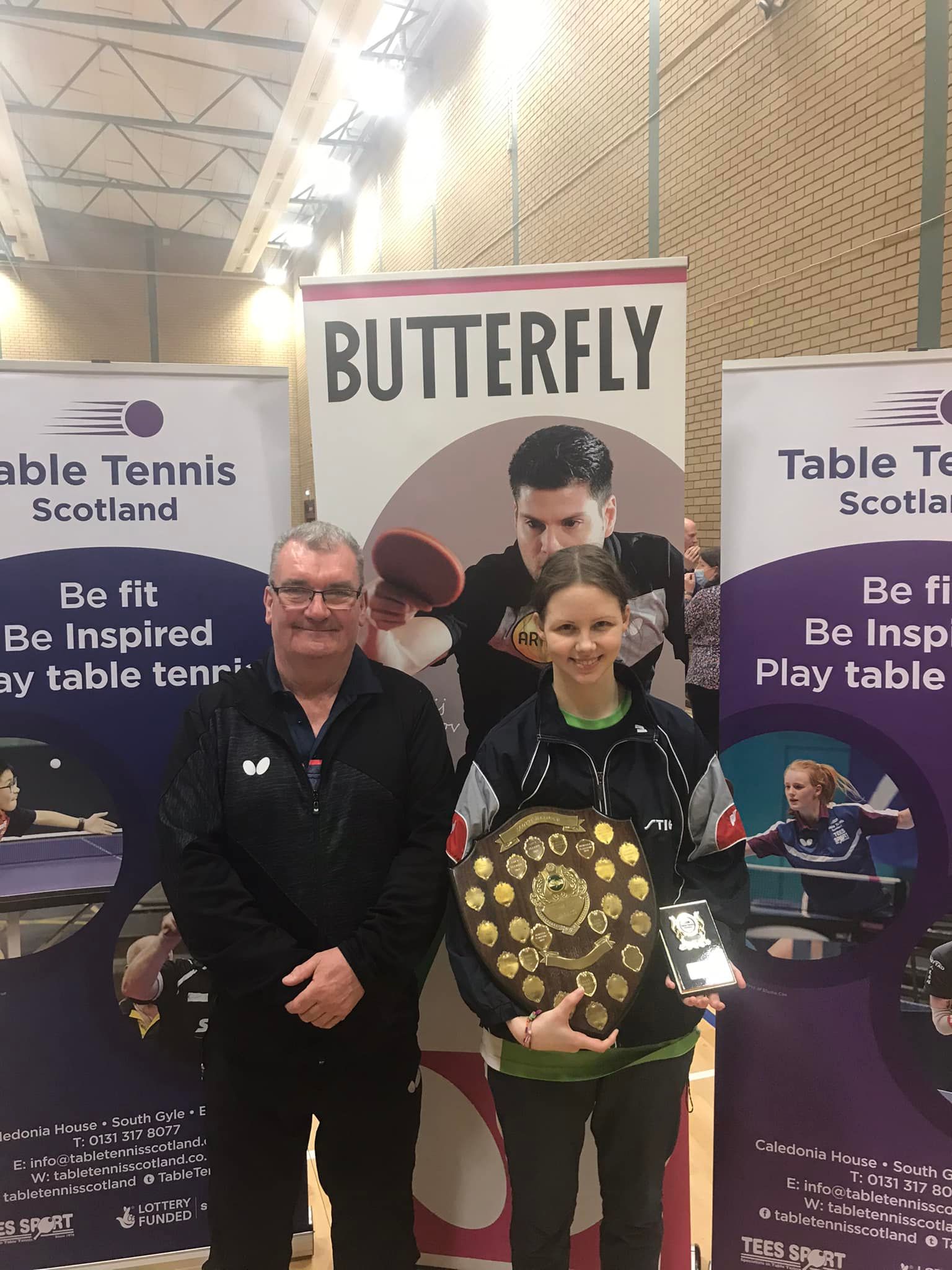 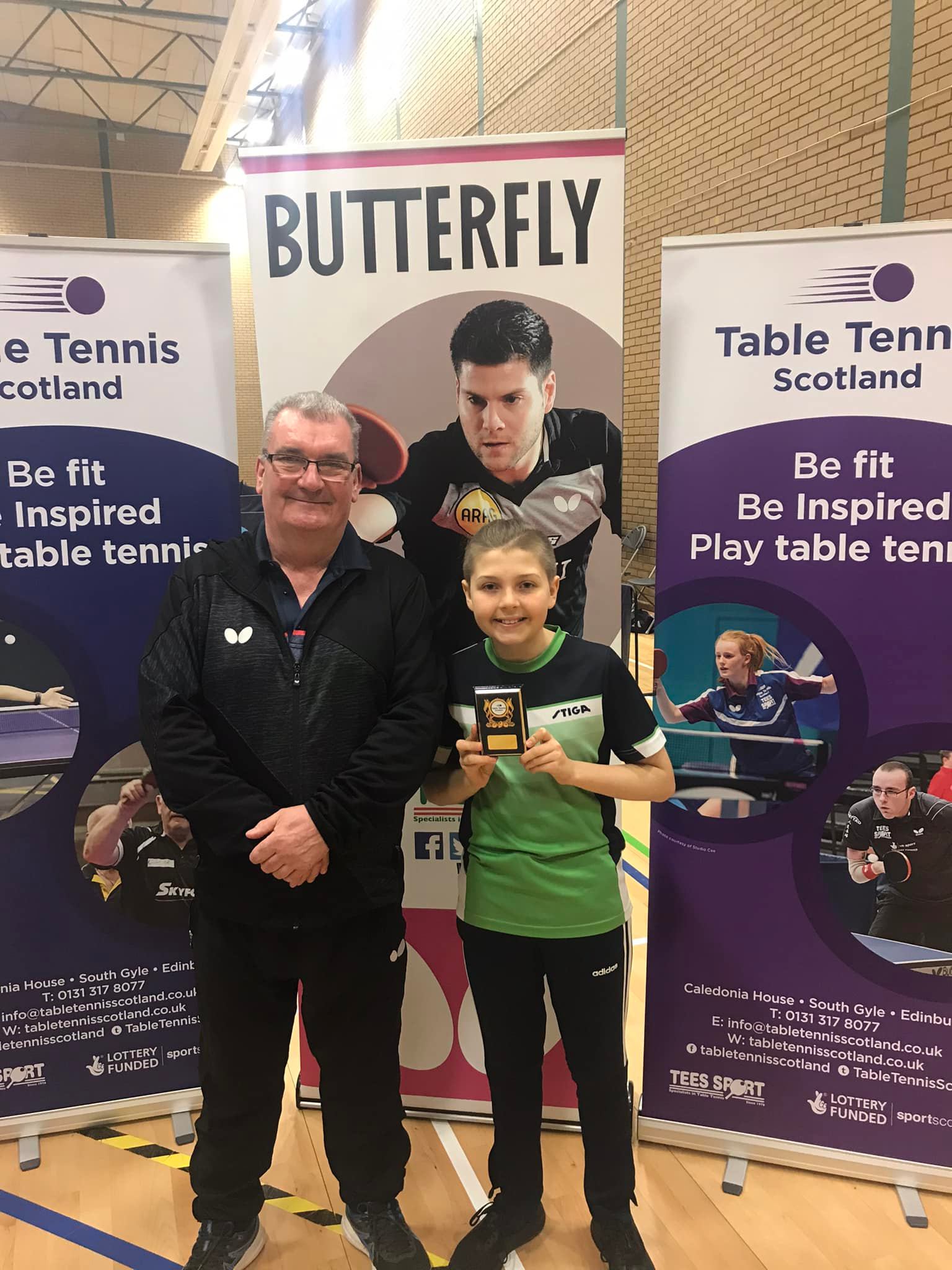 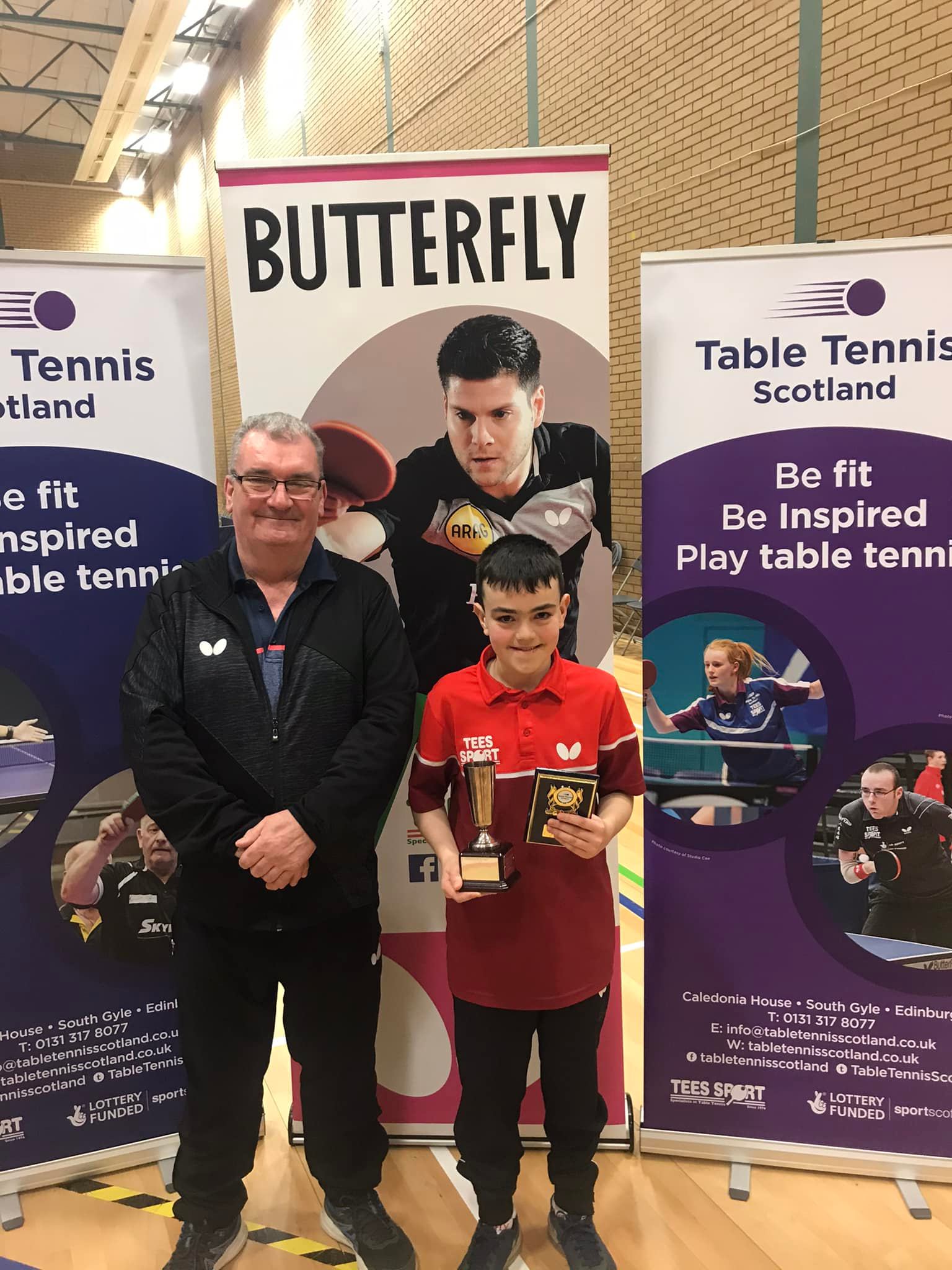 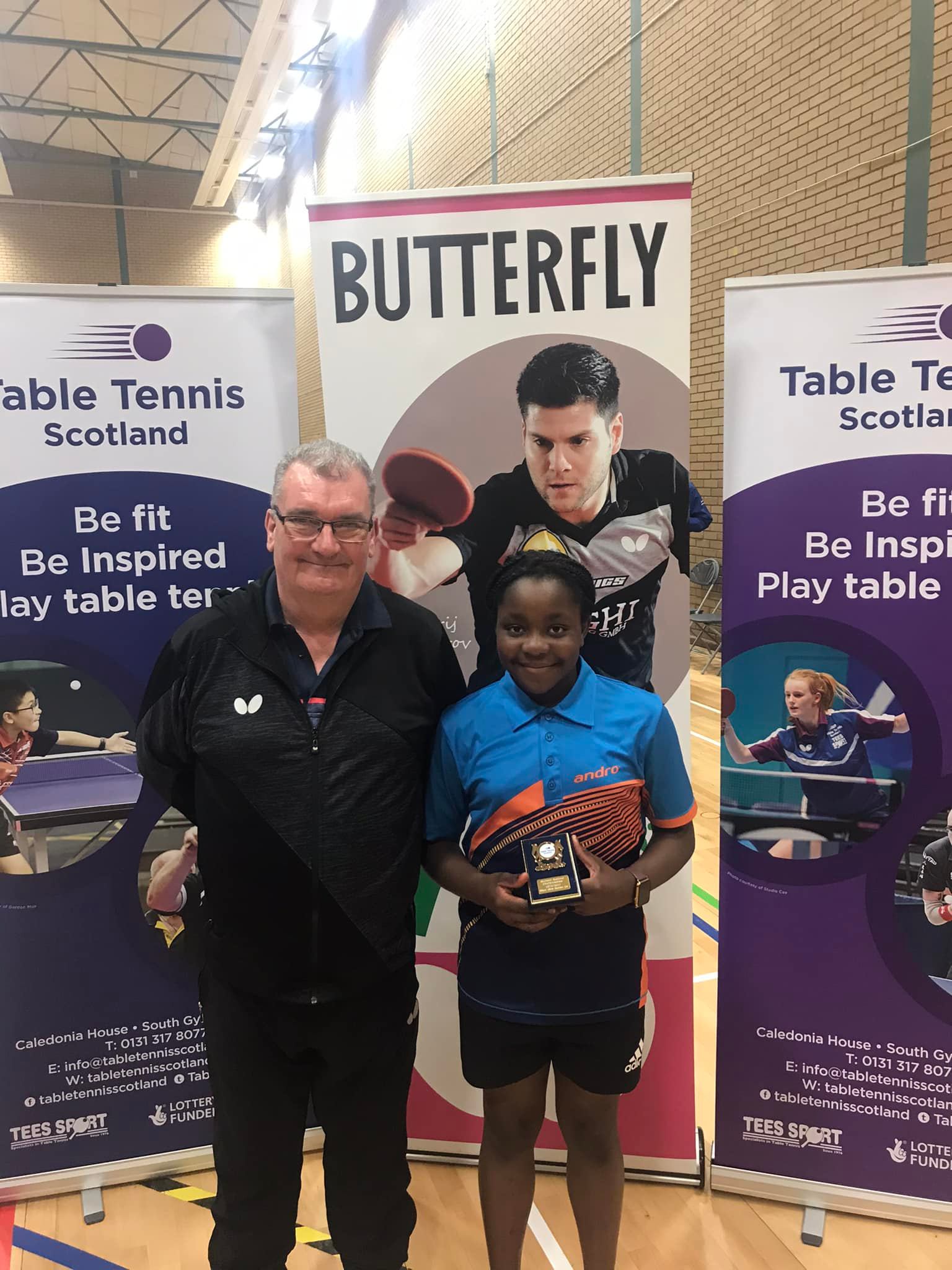 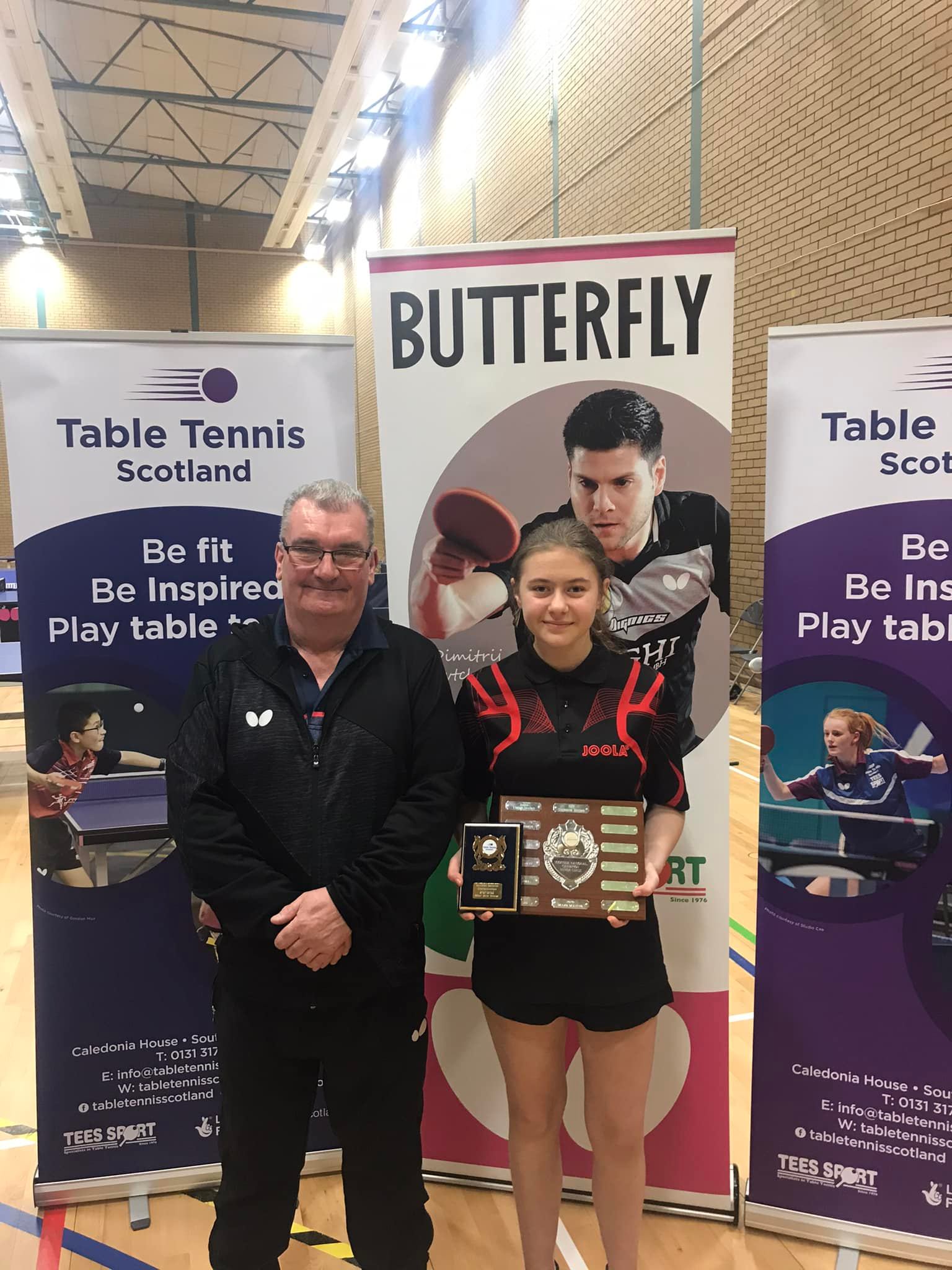