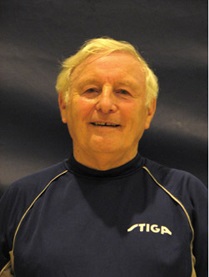 It is with deep regret and much sadness that I report the death late last night of our good friend and long time member Andrew (Drew) McLaren. Our sympathy and condolences go to his wife Mary, daughter Christine, son Tom and the wider family on their huge loss. Funeral arrangements will be posted once known.

During his time with the current club Drew served as Chairman, committee member and was a constant provider of information and support. His support, though, goes much further in that he also served as Chair and Trustee of Bathgate Academy Sports Trust, assisted with the organization of the Scottish Veterans Table Tennis Association tournaments and, indeed, many other events. In fact, it was only in September that he returned from representing the Scottish Veterans team at the Six Nations Championships complaining of feeling unwell.

Over recent years several older people have joined the club having been coached by Drew in the 1970s, and even before. However, his sporting prowess was not restricted to table tennis as he was a junior footballer of some renown. At quite a young age there was an opportunity of a trial with one of England’s premier teams at the time which was missed because of injury. He is also known in West Lothian’s various golf courses.

We all will miss him.

The funeral will be held in Livingston Crematorium (EH54 7FD) on Tuesday 5th December 2017 at 3pm. The family has requested that flowers are restricted to family flowers but that voluntary donations will be accepted on behalf of Pancreatic Cancer UK. Thereafter, the family has invited everyone to meet with them at the Cairn Hotel, Bathgate (EH48 2EL).