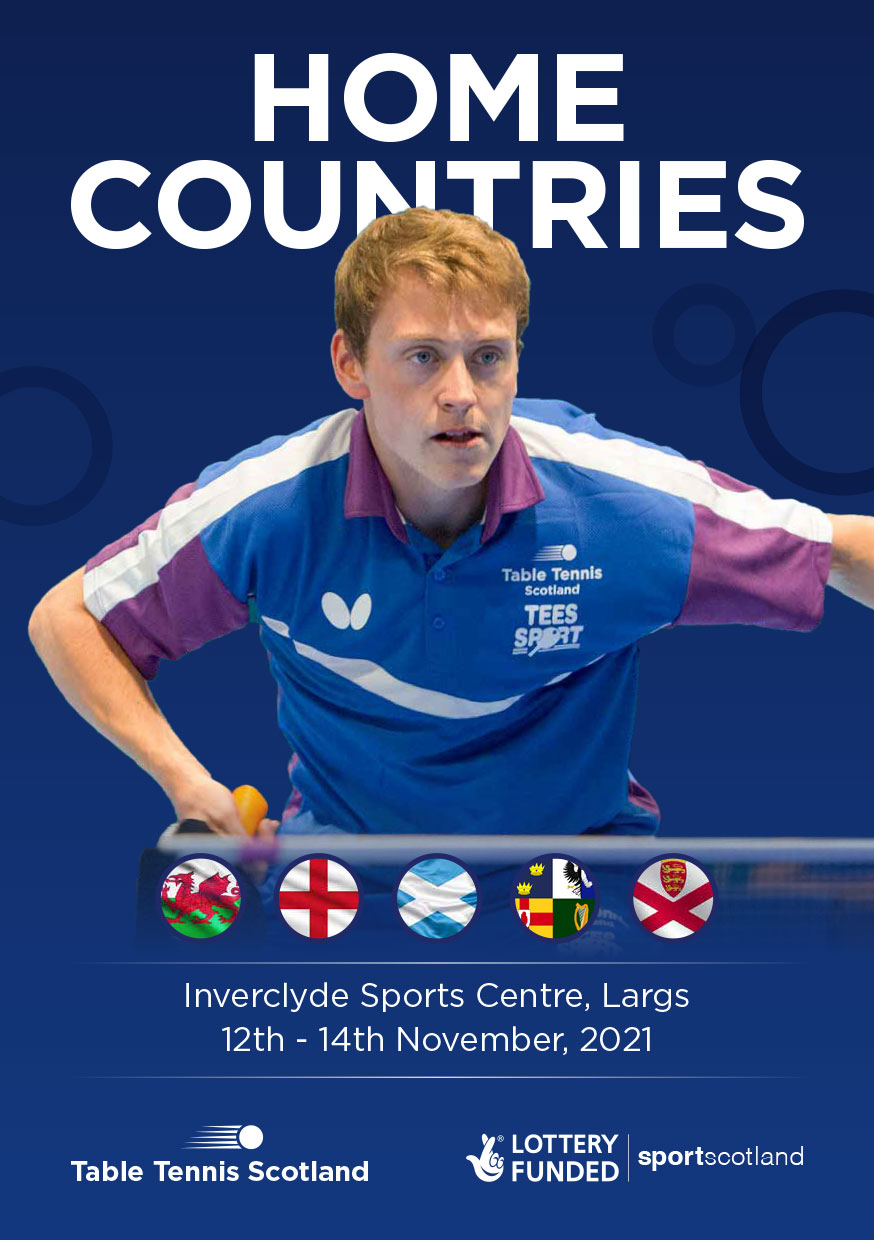 The weekend brings some of the best players from across the Home Countries to Largs for the Home Nations International. There is certainly a feeling of excitement with the Inverclyde Sports Centre holding such a top- class event for the first time since its recent upgrade. Having top class accommodation and food right next door to the venue without the usual headaches of logistics will hopefully bring the best out of those taking part over the weekend. The tireless work from the organising committee of Richard Yule, Terry McLernon MBE, Stewart McGowan and Cynthia Robinson must be commended as without them there would be no event.

This year sees the players of England, Ireland, Wales, Jersey and of course Scotland compete in Senior Men & Women, Junior Boys & Girls and Cadet Boys & Girls. Unfortunately, due to Covid restrictions, players from the Isle of Man and Guernsey are unable to travel to our event.

We also have the exciting prospect of allowing for more players to compete in the Junior Girls and Cadet Girls for players from Jersey teaming up with a player from Scotland and Wales. Not sure yet how yet we name this team with initial ideas that Jerland or Walesery could be options, however maybe best we go back to the drawing board on this one.

The team event kicks off proceedings on Friday afternoon and don’t worry Table Tennis Scotland will be there to keep you up to date with all the results and action with updates across Instagram, Facebook and more in- depth coverage on Twitter. We also have the exciting prospect of bringing you live streaming (technology permitting) from the key matches and we will update you over the weekend on how you can follow this action.

The schedule for the event is as follows:

Senior Men, Junior Boys, Cadet Boys, Cadet Girls will follow the schedule below and for the purpose of the draw the hybrid team from Jersey & Wales in the cadet girls will be referred to as Jersey.

For the Senior Women and Junior Girls the following schedule will be followed.

There are certainty some tasty matches in prospect across all the events and it would be unfair to single any out in particular. However, that would of course be very boring. I hope the supporters of Scotland are ready for the 9am start on Saturday morning where the battle of the Auld Enemy begins across five of the six events.

I’m sure our Welsh counterparts would say the same when session four begins on Saturday. Let`s not forget the fighting Irish who I’m sure will have something to say about how things unfold. Finally, everyone loves an underdog but the players from Jersey provide some top talent to this year’s event. I’m sure they will have their say on who will be crowned champions.

When you look through the list of participants then this year’s event is certainly about the emergent talent which the British Isles has to offer. I’m sure the nerds amongst you will be researching the players involved. Social media has a library of action of what to expect of those taking part this weekend. When you look at the huge experience of the non- playing captains, I am certain they will bring a positive influence to their players over the weekend.

This year the Home Nations International team events follow a different format compared to previous years. Every match will count. If a team wins a match 4-0 this gains them four points for their events league table likewise a 2-2 draw means each team win two points. However, if you still don’t follow don’t worry as the social media coverage will keep you up to date as each event unfolds over the weekend.

The action doesn`t stop there with the doubles event kicking off on Saturday afternoon after the team event has concluded. Each team faces off in an individual knockout draw where there will certainly be some interesting matches to conclude Saturday play.

Sunday brings you the individual events where the players will be hoping they were in top form during the team event as this decides the seedings for the event. Regardless if a players` ranking is higher in their home country, if their partner performed better during Friday and Saturday this will see them being seeded higher and potentially receiving a smoother path to the later knockout rounds. This ensures that every match does count at every turn, as you never know what a defeat or a great win will get you in the draw.

As stated in previous recent reports regarding this season, it is fantastic to see competitive table tennis back after the Covid 19 enforced break. Hosting this event in Scotland in the fantastic facilities Largs has to offer brings excitement to the Scottish table tennis community. I hope this same excitement spreads to our friends throughout the Home Countries. Let the games begin as they say.